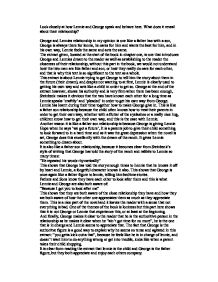 Look closely at how Lennie and George speak and behave here. What does it reveal about their relationship?

Look closely at how Lennie and George speak and behave here. What does it reveal about their relationship? George and Lennies relationship in my opinion is one like a father has with a son, George is always there for lennie, he cares for him and wants the best for him, and in his own way, Lennie feels the same and acts the same. The extract given, located at the start of the book in chapter one, is one that introduces George and Lennies dream to the reader as well as establishing to the reader the closeness of their relationship, without this part in the book, we would not understand how the two men are like father and son, or how they really do care for each other, and that is why this text is so significant to the text as a whole. This extract is about Lennie trying to get George to tell him the story about them in the future (their dream), and despite not wanting to at first, Lennie is clearly used to getting his own way and acts like a child in order to get so. ...read more.

It is clear form reading the extract that lennie is the child and George is the father figure, but they both appreciate and enjoy each others company. 6c) How does Steinbeck present the theme of loneliness in Of Mice and Men? Loneliness is one of the main themes of mice and men and that becomes apparent from early on in the novel. Almost all of Steinbeck's characters experience loneliness at some part in the play, although some like Curley's Wife, Crooks and Candy experience it more than others. Steinbeck makes it very clear at the beginging that the novel is going to be based on loneliness as the novel is set in a place cale 'Soledad' which means loneliness in Spanish, it is these small details that in my opinion makes Of Mice and Men, such a clever and valiable read. Curley's wife is a character that it becomes more evident throughout the book is suffering from loneliness. She has married a man she hardly knew before and now is the only lady on the ranch, people are afraid to talk to her because they don't want to get into trouble with Curley, the short tempered bosses son. ...read more.

George is in my opinion the only main character that we don't get a sign experiences loneliness. Throughout the play he has Lennie to keep him company and soon builds up a friendship with both Candy and Slim, so that as soon as Lennie runs off he has these to then keep in company in the hard time. Steinback was very clever at presenting the theme of loneliness. Almost every character experiences it, yet it is not something that you notice overly when reading the book. Steinback managed to show diffenent levels of loneliness from Crooks who has no one, to Lennie who always has George looking after him, even to the last page in the book! Without the theme of loneliness in Of Mice and Men, the novel would not be the same. It is this loneliness that drives curley's wife to talk to lennie before he kills her , and that causes George to understand he needs to kill lennie himself. The theme of lonlineness was also a theme of the workers during the great depression in America during the 1930's. As migrant workers travelled from ranch to ranch to find jobs, never staying at one place long and travelling on their own, meant loneliness was experienced greatly, so Steinbeck managed to make his novel even more realistic by doing this. ...read more.