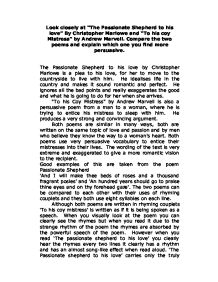 Look closely at &quot;The Passionate Shepherd to his love&quot; By Christopher Marlowe and &quot;To his coy Mistress&quot; by Andrew Marvell. Compare the two poems and explain which one you find more persuasive.

Look closely at "The Passionate Shepherd to his love" By Christopher Marlowe and "To his coy Mistress" by Andrew Marvell. Compare the two poems and explain which one you find more persuasive. The Passionate Shepherd to his love by Christopher Marlowe is a plea to his love, for her to move to the countryside to live with him. He idealises life in the country and makes it sound romantic and perfect. He ignores all the bad points and really exaggerates the good and what he is going to do for her when she arrives. "To his Coy Mistress" by Andrew Marvell is also a persuasive poem from a man to a woman, where he is trying to entice his mistress to sleep with him. He produces a very strong and convincing argument. Both poems are similar in many ways, both are written on the same topic of love and passion and by men who believe they know the way to a woman's heart. ...read more.

The words at the end of each pair of lines are carefully chosen to rhyme and compliment each other. 'The shepherds swains shall dance and sing, For thy delight each May morning' is a good example of this. The use of eight syllables to each line gives the poem a regular rhythm and beat. The predominant 'L' sounds throughout the poem makes the verse flow and is smooth and soft sounding making the words last longer. 'By shallow rivers to whose falls, Melodious bird's sing madrigals' is a perfect example of this. The poem starts very clearly telling you what the poem is about. 'Come with me and be my love ' and finishes re-emphasising his original plan 'Then live with me and be my love' this ensures the reader is still understanding its true meaning. The poem 'To his coy mistress' is also written in rhyming couplets but these are not made clear when reading the poem because of the commas and full stops. ...read more.

Visually and on first read the poems layout is easier to understand while 'His coy mistress' took a few reads to comprehend its real meaning. You can see what the poet wanted to say but it takes practice to be able to achieve it while reading it aloud. The Passionate Shepherd used very visual words allowing me to see pictures of the life he described, comparing the lady he was writing to, always to beautiful things she deserved, while Marvell at times lost the picture amongst gloom and confusion in his words. After many readings both poems have become more clear and I like the way Marvell says that whilst you can't stop the inevitable 'death' you can enjoy the speed of life by enjoying every moment rather than wasting it forever thinking of what might have been. Marvell's poem would be the one to persuade me most because the reality in every aspect of life is, it's not all sweetness and roses, it has many ups and downs making Marvell's poem much closer to reality. ...read more.