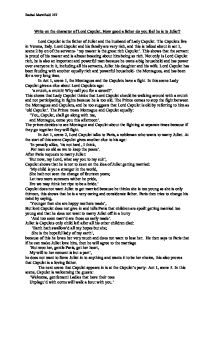 Lord Capulet, How good a father do you feel he is to Juliet

Write on the character of Lord Capulet, How good a father do you feel he is to Juliet? Lord Capulet is the father of Juliet and the husband of Lady Capulet. The Capulets live in Verona, Italy. Lord Capulet and his family are very rich, and this is talked about in act 1, scene 2 by on of the servants- 'my master is the great rich Capulet'. This shows that the servant is proud of his master and is almost boasting about him being so rich. Not only is Lord Capulet rich, he is also an important and powerful man because he owns a big household and has power over everyone in it, including all his servants, Juliet his daughter and his wife. Lord Capulet has been feuding with another equally rich and powerful household- the Montagues, and has been for a very long time. In Act 1, scene 1, the Montagues and the Capulets have a fight. In this scene Lady Capulet gives a clue about Lord Capulets age: 'a crutch, a crutch! Why call you for a sword?'. This shows that Lady Capulet thinks that Lord Capulet should be walking around with a crutch and not participating in fights because he is too old. The Prince comes to stop the fight between the Montagues and Capulets, and he too suggests that Lord Capulet is old by referring to him as 'old Capulet'. ...read more.

He has now changed his mind about letting Juliet decide if she wants to marry Paris and is going to make her. He shows his power/ authority by doing this and expects Juliet to do as she is told and be grateful. Capulet orders his wife to tell Juliet about his decision 'Wife, go you to her ere you go to bed, Acquaint her here of my son Paris' love' Juliet has not even married Paris yet, and already he is calling him his 'son'. Capulet also decides when the wedding takes place, 'A' Thursday let it be- a' Thursday, tell her', He does not care if this is convenient for any of the people involved including Paris and his family, he just decides and his decision is final. This again shows how powerful he is. We next see Capulet when Lady Capulet tells Juliet about the marriage to Paris that he had arranged, she refuses: 'I will not marry yet, and when I do, I swear It shall be Romeo, whom you know I hate, .... Rather than Paris'. Lady Capulet then says, 'Here comes your father, tell him so yourself; And see how he will take it at your hands', She knows that Capulet is going to be furious with Juliet so she wants to keep out of it and does not want to be blamed for Juliet's decision. ...read more.

and is in such deep shock that he cannot even talk, 'Death that hath tane her hence to make me wail Ties up my tongue and will not let me ....speak'. He then compares death to a person that has taken everything away from him and marrying Juliet: 'Death is my son-in-law, Death is my heir, My daughter he hath wedded. I will die, And.leave him all; life, living, all is Death's'. This is dramatic because it was not long ago when he was insulting Juliet and wishing she was never born. At the end of the book, Capulet has realised that Juliet's life was taken because of his and Montague's selfish quarrelling, and wants to shake hands with him: 'O brother Montague, give me thy hand. This is my daughter's jointure, for no more Can I demand'. Overall I think that Capulet is a very changeable character; sometimes he is really kind and caring and at other times he is really bad- tempered and cruel. He likes to have control over everyone and make sure that they know he is in charge. Also it takes something as extreme as his daughter dying for him to realise that his arguing with Montague is unnecessary and selfish. This is very tragic because if he was not so selfish then Juliet and Romeo might not of died so young. Rachel Merrifield 10T ...read more.