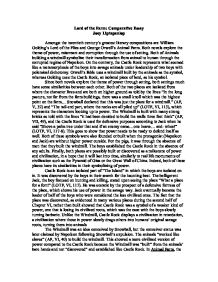 Lord of the Farm: Comparative Essay

Lord of the Farm: Comparative Essay Joey Liptapanlop Amongst the twentieth century's greatest literary compositions are William Golding's Lord of the Flies and George Orwell's Animal Farm. Both novels explore the theme of power, miscreant and corruption through the use of setting. Both of Animals building a windmill symbolize their transformation from animal to human through the corrupted regime of Napoleon. On the contrary, the Castle Rock represents what seemed like a metamorphosis of the boys into savage animals under leadership of two boys with polemical dichotomy. Orwell's fable uses a windmill built by the animals as the symbol, whereas Golding uses the Castle Rock, an isolated piece of land, as his symbol. Since both novels explore the theme of power through setting, both settings much have some similarities between each other. Both of the two places are isolated from where the character lives and are both on higher ground as told by the lines "In the long pasture, not far from the farm buildings, there was a small knoll which was the highest point on the farm... ...read more.

Indeed, both of these places have its similarities in their symbolizing of power. Castle Rock is an isolated part of "The Island" in which the boys are isolated on in. It was discovered by the boys in their search for the haunting best. The belligerent Jack, the boy focused on hunting and killing, stated upon seeing the place "What a place for a fort!" (LOTF, VI, 117). He was ecstatic by the prospect of a defensive fortress of the place, which shows his use of power in the savage way. Jack eventually became the leader of half of the boys who were considered the less civilized ones. The fact that the place was discovered, as evidenced in many various places during the second half of Chapter VI, rather than built showed that Castle Rock was a symbol of a weaker kind of power, one that is losing its civilized roots, which was the case with the boys slowly turning barbaric. Unlike the Windmill, Castle Rock displays a civilization in retardation, a civilization where those in power slowly drags others into humans' original savage roots, turning ...read more.

This evidences a corrupted kind of power. The windmill was also built after Snowball's "forced abdication", when Napoleon was the one with the absolute power. The Windmill is a symbol of a civilization where those who have power exploit it through the use of those with less power. The Windmill and Castle Rock both symbolizes the theme of power in the two classic novels in many ways, be it the way they were found, built or used. Beneath the mighty Windmill and enormous Castle Rock are tales of blood, betrayal, brotherhood, corruption, miscreant and power. Both tales tell of two differently similar falls of civilization. One talks to animals turning human, while the other talks of humans turning animal. In both cases, the turn seemed to be for the worse, due to the misuse of those in power. Is it true that all beings are evil by nature evil? Is it true that "Power corrupts, and absolute power corrupts absolutely"? Or are Golding and Orwell just two pessimistic writers exploring something that will never happen? The way leaders of the world today treat their authority will answer these questions in time. Word count: 913 ...read more.