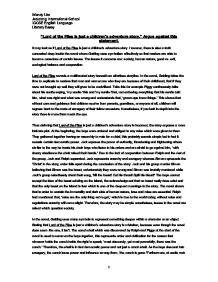 "Lord of the Flies is just a children's adventure story." Argue against this statement. It may look as if Lord of the Flies is just a children's adventure story. However, there is also a truth concealed deep inside the novel where Golding uses symbolism effectively so that readers are able to become conscious of certain issues. The issues it concerns are: society, human nature, good vs. evil, ecological balance and cooperation. Lord of the Flies reveals a multifaceted story beneath an effortless storyline. In the novel, Golding takes the time to explicate to readers that man and women are who they are because of their childhood, that if they were not brought up well they will grow to be uncivilized. Take this for example Piggy continuously talks about his auntie saying, 'my auntie-'this and 'my auntie-'that, remembering everything that his auntie told him, what was right and what was wrong and understands that,' grown-ups know things.' This shows that without care and guidance that children receive from parents, guardians, or anyone at all, children will regress back to the roots of savagery of their fellow ancestors. Nonetheless, if you look in-depth into the story there is more than meets the eye. Thus claiming that Lord of the Flies is just a children's adventure story is incorrect, the story exposes a more intricate plot. At the beginning, the boys were ordered and obliged to any rules which were given to them. ...read more.

Piggy's glasses represent the power of science and the signal fire represents the boys' connection to civilization, 'the fire- rescue.' The fire also measures the strength of the civilized instinct which remains on the island due to the fact that when there was a fire, the boys wanted to be rescued, however, when the fire blew out the boys accepted their savage lives on the island. Ironically in the final stages of the novel they get rescued, not with a signal fire but the fire of savagery, which Jack's gang started in order to help kill Ralph. The Lord of the Flies whom Simon talks to is the symbol of evil, and a Satan figure as well, the very name Lord of the Flies is a literal translation of the biblical name, 'Beelzebub,' a powerful demon in h**l. When the Lord of the Flies speaks to Simon, telling him that there is evil within us and threatens Simon that he and the others will kill Simon, 'we are going to have fun on this island. Understand? So don't try it on, my poor misguided boy, or else we shall do you. See?' Lord of the Flies is an allegorical novel and the characters represent many things. Piggy, who has initiative but is vulnerable, he represents logic, reason and social order because of his organized and nerdy demeanor. Ralph, who represents balance, democracy, order, and is the 'chief' of the group, and Jack, who represents constant opposition in the novel, he is also rebellious and a bully. ...read more.

The Lord of Flies reveals a complex story hidden deep within the plot. The novel does not solely talk about children on an island having fun and games because it raises many ideas and questions which leave the reader either perplexed or overwhelmed by the novel. With the lack of guidance and order savagery will come alight and children will be free to explore their primitive part of their nature. Nonetheless, this would leave them to fend for themselves, this allows them to revert back to their savage roots before man was able to think and make decisions. There is evil within all of us, when morality is lost in our minds evil will take over us and cause mayhem and anarchy. Moreover as an allegorical novel it evidently deals with the propensity for evil and the nature of humanity. Savagery comes alight when civilization is lost; the only thing in mind would be what every human being would consider essential, is to survive no matter what the cost. Without ecological balance, cooperation and conditions our ideals, values and the fundamentals of right and wrong will have gone astray. Therefore to believe that Lord of the Flies is merely a simple children's story is ignoring the fact that there are complexities hidden within Golding's novel. These complexities are not what children's adventure stories should be concerned about at all. Wendy Lim Jerudong International School IGCSE English Language Literary Essay 1 ...read more.

This is a good essay with adequate use of textual references and topic sentences. In places the argument could be said to be a little one- sided and even though the question asks the student to argue against the fact that the novel is a children's adventure story the writer should look at the genre of an adventure story and argue why LOTF is so much more than that.
However the student argues with some sophistication and clearly knows the novel very well and understands the main themes.