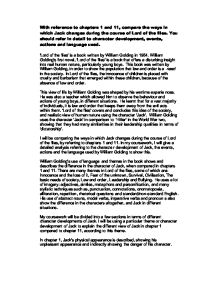 With reference to chapters 1 and 11, compare the ways in which Jack changes during the course of Lord of the flies. You should refer in detail to character development, events, actions and language used. 'Lord of the flies' is a book written by William Golding in 1954. William Golding's first novel, 'Lord of the flies' is a book that offers a disturbing insight into real human nature, particularly young boys. This book was written by William Golding, in order to show the population that law and order is a need in the society. In Lord of the flies, the innocence of children is placed with cruelty and barbarism that emerged within these children, because of the absence of law and order. This view of life by William Golding was shaped by his wartime experiences. He was also a teacher which allowed him to observe the behaviour and actions of young boys, in different situations. He learnt that for a vast majority of individuals, it is law and order that keeps them away from the evil acts within them. 'Lord of the flies' covers and concludes this idea of the society, and realistic view of human nature using the character 'Jack'. William Golding uses the character 'Jack' in comparison to 'Hitler' in the World War two, showing that they had many similarities in their leadership qualities in terms of 'dictatorship'. I will be comparing the ways in which Jack changes during the course of Lord of the flies, by referring to chapters 1 and 11. In my coursework, I will give a detailed analysis referring to the character development of Jack, the events, actions and the language used by William Golding to show this. William Golding's use of language and themes in the book shows and describes the difference in the character of Jack, when compared in chapters 1 and 11. There are many themes in Lord of the flies, some of which are: Innocence and the loss of it, Fear of the unknown, Survival, Civilisation, The basic needs of society, Law and order, Leadership and Bullying. ...read more.

Although his innocence and purity as a child was shown, the nerve of 'hunting' and also 'killing' was already building by the end of chapter 1. 'He snatched his knife out of the sheath and slammed it into a tree trunk. Next time there would be no mercy. He looked around fiercely, daring them to contradict.' The language used to describe his actions in the quote above, show his savage like actions that are beginning to develop. The words 'snatched' and 'slammed' are used to describe Jack's actions which show fierce and vicious connotations. There is alliteration in the first sentence where it says 'tree trunk', which brings emphasis on the reader by slowing them down. Although, it is not directly written, we can deduce that the look on Jack's face would be according to the following sentence, 'Next time there would be no mercy.' This is a very short sentence but has a lot of power to it. It is as though William Golding is warning the reader of the next time that Jack will see a pig. It includes the abstract noun, 'mercy' which we cannot detect by the five senses. Also, the modal verb, 'would' suggests that there is a possibility that 'next time', Jack will kill a pig. The last line, 'He looked around fiercely, daring them to contradict.', shows us that although he had not yet carried out the action of killing the pig, he was so confident in his feeling of the 'next time', that he did not even bother to rethink the past event where he could not kill the pig. Instead, he dared Ralph and Simon silently, just by the look on his face, without saying a word. This shows us that his character is developing into becoming a hunter and killer, through the building of his pride and boastfulness within himself. Therefore by chapter 11, Jack has developed into not only a hunter but also a killer. ...read more.

It gives us the indication that there will be trouble now that the conch is finished off. Thus, Jack's reaction towards the conch breaking has no affect on him whatsoever. ''...The conch is gone-' He ran forward, stooping. 'I'm chief!'' Jack is not affected by the conch, yet he states the fact that 'the conch is gone' showing no sympathy or guilt, and declares himself 'chief!' The use of a hyphen after 'gone' makes the reader slow down to think. This brings an affect on the reader by making them realize the importance of this sentence. The exclamation mark after 'chief' indicates that Jack is shouting with loud volume in his voice, showing that he wants to be heard. The verbs that describe Jack's actions in chapter 11 are negative and prove he is a savage. The verbs used are: 'stooping', 'advancing', 'shouted', 'rush', 'stabbed', 'swung', and so forth. So, we can see from here that in chapter 11, Jack is self- centred and he never considers survival and civilisation. He also disrespected the conch which signifies he has no respect for civilisation, therefore he has become into a savage. In conclusion to my coursework, Jack's character development varied hugely from chapter 1 to chapter 11. Jack's character development started from being powerless, innocent, a bully, civilised, orderly, unable to kill, conductive and being good to others, which became into a killer, disrespectful, savage, malevolent, dictator and most importantly into an uncivilised human being. Jack's character development changed according to the events brought in his life on the island. The characters Ralph and Piggy and mainly his 'followers' played an important role in the character development of Jack throughout the book. Overall, William Golding has made Jack a character that can be identified with not only Hitler from the Second World War, but even adults and children in the modern world. William Golding showed his view of the world, using the character Jack who was only a child, and proved the main themes, 'Evil in man' and 'Violence and death'. ?? ?? ?? ?? ...read more.