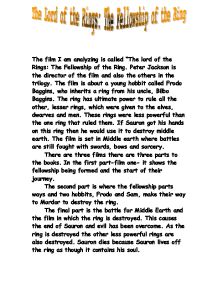 Lord of the Rings

The film I am analyzing is called "The lord of the Rings: The Fellowship of the Ring. Peter Jackson is the director of the film and also the others in the trilogy. The film is about a young hobbit called Frodo Baggins, who inherits a ring from his uncle, Bilbo Baggins. The ring has ultimate power to rule all the other, lesser rings, which were given to the elves, dwarves and men. These rings were less powerful than the one ring that ruled them. If Sauron got his hands on this ring then he would use it to destroy middle earth. The film is set in Middle earth where battles are still fought with swords, bows and sorcery. There are three films there are three parts to the books. In the first part-film one- it shows the fellowship being formed and the start of their journey. The second part is where the fellowship parts ways and two hobbits, Frodo and Sam, make their way to Mordor to destroy the ring. The final part is the battle for Middle Earth and the film in which the ring is destroyed. ...read more.

The effect of this makes the audience unnerved because this is so unnatural. When we are first introduced to the Ringwraiths it is the scene which starts with all the four hobbits on top of a hill. The day is bright and sunny. This has the audience feeling cheerful and relaxed, making them want to enjoy the hobbits laughing and having fun. The next thing we see is all of the hobbits fall down the hill to the bottom on a pathway. The weather changes from good to ghastly in an instant. Automatically this gives the audience a feeling that something is not quite right. The hobbits seem oblivious to this and one of them notices some mushrooms on the side of the path. He calls out to the others to join him but Frodo stands still. He is the one with a very bad feeling. Frodo peers up and down the murky road and then turns round to the others and says "get off the road". At this point the special effects are used on the pathway which gives a distressing feeling that something catastrophic is about to happen. ...read more.

They have no fear of anything except maybe of Sauron. Everything that is alive will run, no matter how big or small it is. This could make the audience feel even more frightened and maybe slightly awed by the power of this ferocious beast. When the hobbits are hidden under the tree, all the bugs and insects clamber over each other to escape from the Ringwraith. At this point everyone in the auditorium feels utterly repulsed by watching all these creatures scarpering from such evil. The wringraiths are a very powerful character to use in a film and in lord of the rings the part they play is vital to the way the film will work. They have to make sure that they are not overplayed or underplayed so as to give the perfect amount of fear, awe and curiosity. Peter Jackson has clearly put a lot of effort into making the wringraiths so life like and enticing which makes it even better that the parts are played so well. Even thought the black riders are not real, the audience still wonder about them and have so many unanswered question which will never be answered, even when they have left the film behind them. ...read more.