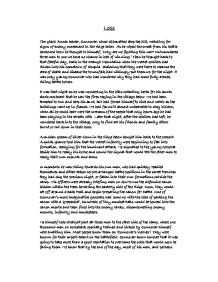 Loss. The giant Anzac leader, Connovar, stood silhouetted atop the hill, watching for signs of enemy movement in the ridge below.

Loss The giant Anzac leader, Connovar, stood silhouetted atop the hill, watching for signs of enemy movement in the ridge below. As he wiped the sweat from his battle hardened brow he thought to himself; 'Why are we fighting this war? Outnumbered three men to one we have no chance in h**l of winning!' Then he thought back to that fateful day, back in the Draugh Mountains when the Varlet soldiers had ridden into his hometown of Illoquia. Claiming that they were there to cleanse the area of death and disease the townsfolk had willingly put them up for the night. It was only young Connovar who had wondered why they had come fully armed, riding battle horses. It was that night as he was wondering in the hills collecting herbs for his aunts stock cupboard that he saw the fires raging in the village below. He had been tempted to run and help his aunt, but had forced himself to hide and watch as the buildings went up in flames. He had found it almost unbearable to stay hidden, when all he could hear were the screams of the people that only hours ago he had been playing in the streets with. Later that night, after the soldiers had left, he wondered back into the village, only to find all his friends and family either burnt or cut down in their beds. ...read more.

After briefing his own men, Connovar walked back through the camp, watching as other men readied themselves for the coming battle. Some were saying prayers, others checking muskets or swords. Like him, most knew that they would either die in the coming battle, or be captured by the enemy and subjected to excruciating pain in a Varlet dungeon some place far over the border. Because of this, all the men were willing to fight to the death and would not even dream of running. This was one of the few advantages they had over the enemy. Whilst his Wolves made their way into the cover of the woods on the westerly side of the ridge, Connovar himself rode over the hilltop giving the men a final check. A few minutes later he was at the head of his men awaiting the charge. Suddenly there was the boom of canon fire as the enemy opened fire on the hillside. Connovar's men were not shaken and stayed in formation awaiting the enemy charge. As salvo after salvo ripped into the hillside he waited. Then came the charge. Three thousand red-garbed infantry armed with muskets, swords and pistols ran up the hillside. Unfortunately for them, the canon fire had caused half the hill to fall away making it very hard to scale. ...read more.

He turned and saw an enemy soldier pulling his own sabre back out of his side. Before he had a chance to even look at who he had stabbed, his head had dropped to the floor, all signs of life drained from him. Connovar now took a second to look around; he was met with a scene of total and utter carnage. They had won the battle, but there was still a war to come, that however was to be fought in the Capital and had little affect on Connovar. Quickly he gathered his remaining men and rode back into the camp. Once again he stood silhouetted atop the hill. At the back of his mind he still felt a small pang of guilt for the brutal loss of life suffered on both sides. He thought to himself; yes they may have one the war, but what have they really accomplished. Ten thousand men will not be able to fight in the coming battles. But was that a real gain? Or was it a loss? He continued to think over and over the matter as he walked towards the horizon. Then he came to the conclusion, loss was infinite. Life itself was one big loss. Everyone dies; many people loose things, whether it be wealth or meagre positions, in the end they had to be lost. No one can everything, and yet no one can have nothing. The spirits of the men slaughtered on the battle field ...read more.