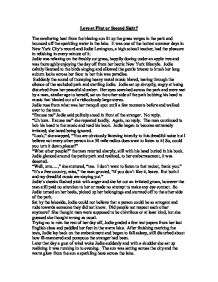 Love at First or Second Sight

Love at First or Second Sight? The sweltering heat from the blazing sun lit up the grass verges in the park and bounced off the sparkling water in the lake. It was one of the hottest summer days in New York City's record and Jodie Lexington, a high school teacher, had the pleasure in relishing in every minute of it. Jodie was relaxing on the freshly cut grass, happily dozing under an apple tree and was thoroughly enjoying the day off from her hectic New York lifestyle. Jodie calmly listened to the birds singing and allowed the gentle breeze to brush her long auburn locks across her face: to her this was paradise. Suddenly the sound of thumping heavy metal music blared, tearing through the silence of the secluded park and startling Jodie. Jodie sat up abruptly, angry at being disturbed from her peaceful slumber. Her eyes searched across the park and were met by a man, similar age to herself, sat on the other side of the path bobbing his head to music that blasted out of a ridiculously large stereo. ...read more.

Trying no to ruin the rest of her day off, Jodie graded a few test papers from her last English class and paddled her feet in the warm lake. After finishing marking the tests, Jodie lay back on the embankment and began to fall asleep, still disturbed about how ill-mannered and pompous the stranger had been. Later that day a gust of wind woke Jodie suddenly and with a shudder she sat up realizing it was running in to evening. The sun was setting across the city and the warm glow from the sun a sparkling haze across the lake. Jodie hugged her books tight in to her chest and strode along the winding walkways in the park towards the flower garden. Surrounded by dancing daffodils, Jodie bent down to pick a petal and was met by a pair of perfectly maintained, shiny leather shoes. Her eyes slowly moved up and where met by the chiseled features, piercing blue eyes and golden hair of a ruggedly handsome man. ...read more.

Andrew tilted up Jodie's chin with his hand until their eyes met. Jodie's heart skipped a beat and butterflies flew around in her stomach as a surprising thought dawned on her. She was unusually attracted to a man she thought to be arrogant and rude and who at first impressions had irritated her immensely. Andrew leaned in closely to Jodie and placed a soft, gentle kiss on her lips. Thoughts buzzed around her head and her body tingled with excitement. Jodie's breath was taken away with one small kiss; she had never experienced such an intense feeling before. It was love and they both knew it. Jodie hastily pulled away from Andrew and began to walk towards the entrance of the park, leaving Andrew in the flower garden still stunned by their kiss. As she left the park Jodie grinned from ear to ear as she relived the amazing feeling of experiencing love at first sight, but as she twirled the ring on her finger it dawned on her and she thought to herself: 'What have I done? I'm married.' ...read more.