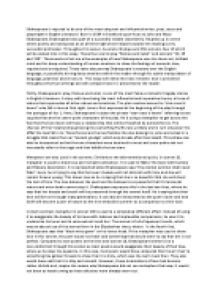 ﻿Shakespeare is reputed to be one of the most eloquent and influential writer, poet, actor and playwright in English Literature. Born in 1564 in Stratford-upon-Avon to John and Mary Shakespeare, Shakespeare was part of a successful middle class family. He grew up in a time where poetry and acting was at an all-time high which helped towards him leading a very successful profession. Throughout his career, he wrote 36 plays and 154 sonnets, four of which will be delved into in this essay. These four are his play ?Romeo and Juliet? and sonnets ?18, 29 and 130?. These works of art are a few examples of how Shakespeare uses his clever wit, brilliant mind and his deep understanding of human emotions to show the feelings of romantic love, requited and unrequited. These texts also portray Shakespeare's mastery over the English language, successfully stirring deep emotions within the reader through his subtle manipulation of language, grammar and structure. This essay will delve into how romantic love is presented throughout the four writings and will compare how it is presented to the reader. Firstly, Shakespeare?s play, Romeo and Juliet, is one of the most famous romantic tragedy stories in English Literature. A story with love being the most influential and imperative theme, a force of nature that supersedes all other values and emotions. ...read more.

Rather, learning about the person, their personality and behaviour seems a more appropriate way to build a relationship. While sonnet 18 and 130 are poised at opposite ends of the love scale, sonnet 29 seems too fall in the middle, supporting both views portrayed in the other two sonnets. The poet tries to state the romantic love can fall under either being realistic or a dream created by your mind. One side of this idea is formed through the first two quatrains, while the other half is constructed in the last quatrain and the rhyming couplet. This is evident through the fact that in line 9 it says ?yet?, illustrating the fact that the either the problem is being solved or another point of view is being shown. In this case, the poet shows the other side to the tragedy that is upon him. The first two quatrains indicate Shakespeare?s loneliness and lack of love. He is firm on the fact that he should be ?like him with friends possess?d?. From this quote the reader can see that Shakespeare has no friends and would love to have friends like a certain ?he?, which could be an old friend that has betrayed him or someone higher than his ?outcast state?, alluding to the fact that he has been cast out of society. ...read more.

This leads to the other face of love. The face that is truly ugly and one that no one should need to see. This branch of love is seen when both lovers end up killing themselves due to not being able to be together because of a family feud. Throughout all four pieces of work, there is a distinct and repetitive pattern in the way Shakespeare portrays love. This is established through the way he uses iambic pentameter to give off a harmonious feel to the sentences. People of today may take a certain dislike to some of Shakespeare writings, while appreciate understand some others. Sonnet 18 and Romeo and Juliet are examples of how they may not be fond of his work, as in the case of the play, the speed at which love blossoms into a full blown relationship and marriage is way too fast, and many people nowadays know that a relationship like this is impossible to keep a hold on. In the sonnet, he uses a lot of exaggeration to his devotion to his love, this would put off readers as most know that the external looks is not what determines a good relationship. This is the reason why sonnet 29 and 130 would appeal more to people of this day and age. These two sonnets show that love is about inner beauty and that when you think about the person you love, it should bring you happiness. ...read more.