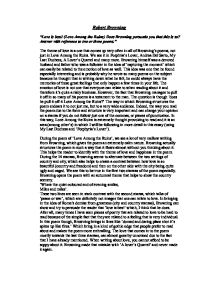 Love is best! (Love Among the Ruins) Does Browning persuade you that this is so? Answer with reference to two or three poems.&quot; The theme of love is a one that comes up very often in all of Browning's poems, not just in Love Among the Ruins.

Robert Browning "Love is best! (Love Among the Ruins) Does Browning persuade you that this is so? Answer with reference to two or three poems." The theme of love is a one that comes up very often in all of Browning's poems, not just in Love Among the Ruins. We see it in Porphria's Lover, Andrea Del Sarto, My Last Duchess, A Lover's Quarrel and many more. Browning himself was a devoted husband and father who was a follower in the idea of 'capturing the moment' which can easily be related to the emotion of love as well. This idea was one that he found especially interesting and is probably why he wrote so many poems on the subject because he thought that in writing down what he felt, he could always have the memories of these great feelings that only happen a few times in your life. The emotion of love is not one that everyone can relate to when reading about it and therefore it's quite a risky business. However, the fact that Browning manages to pull it off in so many of his poems is a testament to the man. The question is though 'does he pull it off it Love Among the Ruins?' ...read more.

In this poem though, Browning brings in lines like 'domed and daring place shot it's spires up like fires.' Which bring in a kind of gothic edge that people prefer to read about and makes the poem more enthralling. The love that comes in to the poem mostly towards the last three stanzas, can almost goes by unnoticed due to the fact that I have already mentioned. When writing about love, you cannot afford to be soppy about it. Browning made that mistake with 'A lover's Quarrel' and never made it again. The poems I have chosen to help me come to my conclusion on whether 'love is best' are 'Porphria's Lover' and 'My Last Duchess'. The two poems here both have a strong element of love in them and have certain things in common with 'Love Among the Ruins'. For example, in 'Porphyria's Love' Browning introduces the idea of preserving the moment by killing Porphyria so her lover can always have her in his arms. In the poem, the setting is very gloomy and disturbed, "The rain set early in tonight, the sullen wind was soon awake." This shows how the Lover is feeling at that moment. ...read more.

Through the Duke's ramblings, we learn that he is a self-centered, arrogant, and completely chauvinistic man, asserting emotions of both power and weakness. The Duke is a materialistic, proud man. He has a high rank in nobility and a well-respected name. Thus, he tries to portray himself as powerful and sophisticated. But his underlying motives shine through and we see the Duke as jealous and possessive. The Duke was formerly married and this marriage ended tragically. His last Duchess had a wandering eye and a smile for everyone. This infuriated the Duke - "She smiled, no doubt, whene'er I passed her; but who passed without much the same smile?" The Duke cannot bear to watch his wife look at other men and to make sure that she never does it again, he has her killed. In conclusion, these two additional poems help to justify Browning's claim that love is best in that love takes over everybody to whom it is introduced. The power of love is one that is on a level much higher than any other emotion and therefore it is hardest to control. In the three poems I have analysed, we see this fact come into full effect and we realise how damaging love can be but also how brilliant it is as well. ...read more.