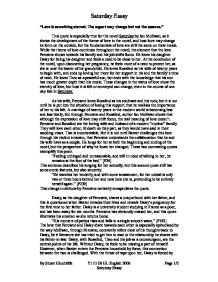 "Love is something eternal. The aspect may change but not the essence." This quote is especially true for the novel Saturday by Ian McEwan, as it shows the development of the theme of love in the novel, and how love may change its form on the outside, but the fundamentals of love are still the same on thew inside. While the theme of love continues throughout the novel, the element that the love Perowne shows towards his family and his job shifts focus. He loves his daughter Daisy for being his daughter and feels a need to be close to her. At the conclusion of the novel, upon discovering her pregnancy, he feels more of a need to protect her, as she is now the bearer of his grandchild. He loves Rosalind as his wife of twenty years to begin with, and ends up loving her more for her support in his and the family's time of need. He loves Theo as a peaceful son, but ends with the knowledge that his son has much greater depth than his music. ...read more.

Daisy is a university student studying in France as a poet, and has been away for six months. Perowne has obviously missed her, and this quote illustrates his emotion as she returns home. "His moment of pathos rises and falls in a single smooth wave." [P182] The love that Perowne and Daisy share towards each other is especially epitomised by the way McEwan, through Perowne, constantly refers most of his thoughts back to Daisy, be it literature she has tried to get him to read or the relationship he shares with his father-in-law. Daisy, with Rosalind, Theo and his job as a neurosurgeon, are the central points of his life. Without Daisy, he feels to be missing a part of himself. However, when Baxter enters the Perowne household by force, this connection between the two is challenged. With the threat of r**e upon her, Daisy is forced by Baxter to remove all of her clothes. She does so reluctantly, and in doing so, reveals to her father and the rest of the family her pregnancy. Perowne is clearly shocked. ...read more.

the handsome healthy son with t the strong guitarist's hangs come to rescue him," The development of Theo as a character in Saturday bears a strong resemblance to the quote. In conclusion, the development of the theme of love and Perowne's attitude about love towards his family members is shown in the novel Saturday, proving the above quote to be correct. Rosalind, as his loving wife of twenty years, provides Perowne with a stable position in life, and proves to be there in his time of need. Perowne did not previously think of her like that. Theo, Perowne's eighteen year-old son, is a pacifist blue musician, whose initial character is portrayed in this manner, is developed to reveal a strong guitarist who can protect his family from danger from scum like Baxter. Daisy, Perowne's loving daughter, is a poet who provides Perowne with solidarity, but who also challenges him with outside ideas on the world. When Baxter puts this relationship into jeopardy, Perowne feels more inclined to protect his daughter. For these reasons, the quote "Love is something eternal. The aspect may change but not the essence" is especially accurate for the novel Saturday by Ian McEwan. Word Count: 1152 Saturday Essay By Stuart Hinchliffe Yr 11 IB HL English 2006 Page 1/2 Saturday Essay ...read more.