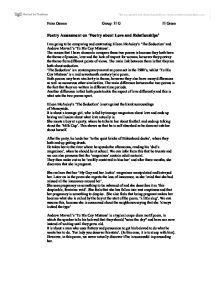 Poetry Assessment on 'Poetry about Love and Relationships' I am going to be comparing and contrasting Eileen McAuley's 'The Seduction' and Andrew Marvell's 'To His Coy Mistress'. The reason that I have chosen to compare these two poems is because they both have the theme of passion, love and the lack of respect for women, however they portray the theme from different points of views. The main link between them is that they are both about seduction. 'The Seduction' is a contemporary narrative poem set in the 1980's, whilst 'To His Coy Mistress' is a mid seventeenth century lyric poem. Both poems may have similarity in theme; however they also have many differences as well as numerous other similarities. The main difference between the two poems is the fact that they are written in different time periods. Another difference is that both poets tackle the aspect of love differently and this is what sets the two poems apart. Eileen McAuley's 'The Seduction' is set against the bleak surroundings of Merseyside. It is about a teenage girl, who is fed by teenage magazines about love and ends up having an illusion about what love actually is. She meets a boy at a party, where he talks to her about football and ends up talking about the 'Milk Cup'. This shows us that he is self absorbed as he does not ask her about herself. After the party, he leads her 'to the quiet bricks of Birkenhead docks', where they both end up getting drunk. He takes her to the river where he spends the afternoons, reading his 'dad's magazines', when he should be at school. We can infer from this that he truants and we can also presume that the 'magazines' contain adult material. They then make out as he 'swiftly contrived to kiss her' and after three months, she discovers that she is pregnant. ...read more.

In relation to the poems, this is very ironic as the girl in 'The Seduction' is living with all the rights and she is the one who has no control over the situation, whereas the woman in 'To His Coy Mistress' is not living with rights and she has more power over the man. 'To His Coy Mistress' also uses seventeenth century language, for example, 'thou' and this is because that was how they spoke. He also uses conditional clauses except there is an inversion of word order. Instead of saying 'if we', he says 'had we' and this was probably quite common in those days. Seventeenth century folk also liked exotic faraway locations, for example, Marvell's use of the 'Ganges', which has religious significance, but most importantly, was exotic in their opinion. The title of the poem ('To His Coy Mistress') also indicates about the time of the poem. In the mid seventeenth century, the word 'mistress' meant either someone of lower class (like a servant) or girlfriend. With 'The Seduction', there are a few indications. The football players are the first indication that the poem is set in the 1980's and the main indication is when the girl talks about her O-levels that she would be sitting. This shows that the poem is set pre 1987. I enjoyed both poems quite a lot, but I preferred 'The Seduction' in terms of its ideas that it portrayed as I agree with it and can relate to it. I also preferred 'The Seduction' in terms of its language and its layout, because it was more understandable, as it was written earlier than 'To His Coy Mistress' and also because it was written in stanzas. However, overall, I favour 'To His Coy Mistress' more than 'The Seduction', because I preferred its rhyming to the rhyming of 'The Seduction' and even though the poem used more abstract concepts and ideas, I liked the way it consisted of geographical imagery and hyperboles. ?? ?? ?? ?? Faiza Osman Group: 11 G 11 Green ...read more.