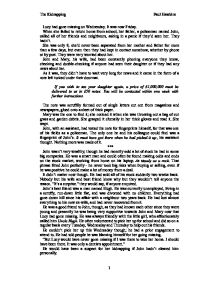 Lucy had gone missing on Wednesday. It was now Friday. When she failed to return home from school, her father, a policeman named John, called all of her friends and neighbours, asking in a panic if they'd seen her. They hadn't. She was only 8, she'd never been separated from her mother and father for more than a few days, but even then they had kept in contact somehow, whether by phone or by post. They were very worried about her. John and Mary, his wife, had been constantly phoning everyone they knew, checking and double-checking if anyone had seen their daughter or if they had any news about her. As it was, they didn't have to wait very long for news and it came in the form of a note left tucked under their doormat. If you wish to see your daughter again, a price of �1,000,000 must be delivered to us in �50 notes. You will be contacted within one week with further instructions. The note was scruffily formed out of single letters cut out from magazines and newspapers, glued onto a sheet of thick paper. Mary was the one to find it; she noticed it when she was throwing out a bag of cut grass and garden debris. She grasped it clumsily in her thick gloves and read it. ...read more.

John and Mary are to come alone, unarmed, a suitcase for each of them, and are to drop the money off in the centre of Ranseed's Street between the Post Office and the Butchers shop on a spot marked with a white cross. All police are to stay on the other side of the Ranseed Bridge. Any movement past that point, and I will kill the girl. The money is to be left on the cross next to another note that will explain the handing over of the girl. This is take place at midnight on Wednesday. No funny business. The note was taken back to the police station and once again tested for prints. Nothing. *** Over the previous days, John and Mary had managed to collect up all they money they could. They even withdrew all of the money from their own bank accounts though they didn't plan on using it unless they really had to. They had borrowed money off of friends, taken out loans from banks, called in favours from other relatives and generally looked everywhere they could for money. They knew a lot of people and coming up with a million pounds, although not an easy task, was made a lot more bearable by all the willing helpers, happy to aid their friends. ...read more.

They reached the end of the short bridge, taking a large step over a low wire near the end of it and swerving round a sheet of erect nails, as if a sixth sense was guiding them round the traps. The police couldn't see them from their side. They reached the spot. From the police side, all they could see was two blurry figures standing there. Then, suddenly, they were gone. The police watched on, completely baffled. The couple that had stood before them in the pitch-black street had just vanished in an instant. They watched on for a full three minutes, waiting for something else to happen which would confirm their eyes had been playing tricks on them. Down the alley Hugh had started the car. John and Mary arrived a little later, John jumped into the front seat and Mary into the back. They both pulled of the large black sheets they had hid themselves under. Mary hugged Lucy, and John spoke to Hugh. "It's done, let's go!" Hugh put his foot down on the pedal and the four sped off straight towards the airport, destined for their new life abroad, with well over a million pounds at their disposal. They smiled, laughed and hugged each other all the way there. The plan had gone off without a hitch. ?? ?? ?? ?? The Kidnapping Paul Hawkins 1 ...read more.