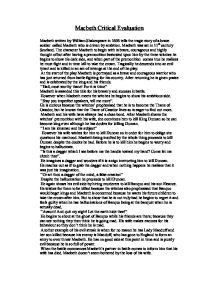 Macbeth Critical Evaluation Macbeth written by William Shakespeare in 1606 tells the tragic story of a brave soldier called Macbeth who is driven by ambition. Macbeth was set in 11th century Scotland. The character Macbeth to begin with is brave, courageous and highly thought of but after having a premonition bestowed upon him by the three witches he begins to show his dark side, and when part of the premonition comes true he realises he must fight and in time kill to take the crown. Tragically he descends into an evil tyrant and is killed in an act of revenge at the end of the play. At the start of the play Macbeth is portrayed as a brave and courageous warrior who has just returned from battle fighting for his country. After returning he is given praise and is celebrated by the king and his friends. ...read more.

"Is this a dagger which I see before me the handle toward my hand? Come let me clutch thee". He imagines a dagger and wonders if it is a sign instructing him to kill Duncan. He reaches out as if to grab the dagger and when nothing happens he realises that it was just his imagination. "Or art thou a dagger of the mind, a false creation" Despite the hallucination he proceeds to kill Duncan. He again shows his evil side by hiring murderers to kill Banquo and his son Fleance. He wishes for them to be killed because the witches also prophesised that Banquo would beget kings and Macbeth is concerned because he wants his future children to take the crown after him. But to show that he is not truly bad he begins to regret it and feels guilty when he has hallucinations of Banquo being at the banquet when he is actually dead. ...read more.

At the end of the play he challenges Macduff to a fight. Macduff wanted to kill Macbeth because he had his wife and son killed for no reason but pure evil. For Macbeths' wife's' death, he took it lightly without much care but in contrast when Macduff heard of his wife and son's death he feels very sad and was to by Malcolm to dispute it like man. "I shall do, but I must also feel it like a man" He is too upset to face the truthful horrors. Macbeth dies as a tragic hero he is killed by Macduff and his head is mounted upon a pole. Malcolm, Duncan's son, takes the crown and becomes king. Overall I have come to realise that a playwright rarely represents a character that is completely good or completely bad. Macbeth had been so overrun with ambition that he committed murder with no conscience and never really mourned for hi wife. ...read more.