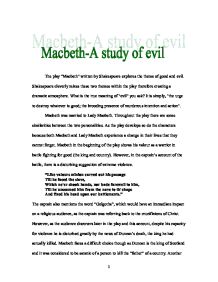 Macbeth - A study of evil.

The play "Macbeth" written by Shakespeare explores the theme of good and evil. Shakespeare cleverly mixes these two themes within the play therefore creating a dramatic atmosphere. What is the true meaning of "evil" you ask? It is simply, "the urge to destroy whatever is good; the brooding presence of murderous intention and action". Macbeth was married to Lady Macbeth. Throughout the play there are some similarities between the two personalities. As the play develops so do the characters because both Macbeth and Lady Macbeth experience a change in their lives that they cannot forget. Macbeth in the beginning of the play shows his valour as a warrior in battle fighting for good (the king and country). However, in the captain's account of the battle, there is a disturbing suggestion of extreme violence. "Like valours minion carved out his passage Till he faced the slave, Which ne'er shook hands, nor bade farewell to him, Till he unseamed him from the nave to th'chaps And fixed his head upon our battlements." The captain also mentions the word "Golgotha", which would have an immediate impact on a religious audience, as the captain was referring back to the crucifixions of Christ. However, as the audience discovers later in the play and this account, despite his capacity for violence he is disturbed greatly by the news of Duncan's death, the king he had actually killed. Macbeth faces a difficult choice though as Duncan is the king of Scotland and it was considered to be satanic of a person to kill the "father" of a country. Another fact was that Macbeth was one of Duncan's most loyal subjects and "kinsman". A kinsman was like a family member such as a father, which also relates to the Father of Scotland. Macbeth appears for the first time when he was with Banquo, a noble friend. They are both walking round a heath. ...read more.

Lady Macbeth dies off stage and the cause of her death is unknown, but from what we know she was driven mad and probably died because of her guilty conscience. It is also suggested that she killed herself which is another mortal sin, therefore guaranteeing "damnation". Lady Macbeth and Macbeth are not that different, as they were certainly both partners in crime committing the murder of Duncan together (husband and wife killers). But as the play develops you can see that Macbeth gains ruthlessness throughout the play, whereas Lady Macbeth does the opposite and slowly diminishes succumbing to the terrors of a bad conscience. This is all being influenced by just three witches. The witches play an important role in this play, as they are fundamentally the centre of all evil that is manifested in the play. In Macbeth's time witches and witchcraft "were the object of morbid and fevered fascination". And persecution was at an alarming rate with hundreds being prosecuted a week (mostly all women). Most of these women or men weren't even witches but the persecutors always found an excuse for a witch's guilty verdict and they could prove their point as well. Witches were nearly always burned to death at the stake as people thought that they were so evil that their sins had to be burnt out of the occupant. This explained why witches could not say a prayer or do anything of a religious aspect. Holy water could not cleanse them of their sins, as instead it would harm them. Witches were credited for their diabolical powers and how they could perform mystic spells in their favour against their enemies. Witches could also raise the spirits of the dead by concocting a brew consisting of some gruesome ingredients, "In the poisoned entrails throw... ...Fillet of a fenny snake, In the cauldron boil and bake: Eye of newt, and toe of frog, Wool of bat, and tongue of dog... ...read more.

Characters like Banquo and Fleance, Macduff's family and King Edward seem to be pure good fighting against Macbeth who turns out to be pure evil. Banquo and Fleance show the goodness within them as Banquo dies thinking of his son's safety while Lady Macduff and her son represent family loyalty. It is strange that Macbeth starts off in the play as a noble, loyal and "good" soldier serving his king and country. But as soon as he meets the witches this all changes because the witches tempt him into fulfilling his ambitions. It is also strange that Macbeth, before he kills Duncan, refers to images of holiness, "...Will pleade like angels, trumpet-tongued against The deep damnation of his taking off. And pity, like a naked new-born babe, Striding the blast, or heaven's cherubin, horsed..." Although the witches influenced Macbeth into committing the crime, it was Macbeth's own choice not to carry out the ruthlessness and killing. But after this incident murder and nightmares were going to prevent Macbeth to turn back to the good person that he was before. Lady Macbeth also played an important role in Macbeth's "journey to h**l". She was the one who also persuaded him to kill Duncan and fulfil their ambitions. Overall I think this play was a powerful representation of good and evil. It shows that people in Jacobean times would have thought of such things as the king being known as a sort of God therefore able to heal anything he touches. This runs parallel to the characters of King Edward and Duncan. The human minds in those times were susceptible to "evil spirits or thought" if the mind was ready and willing to receive them. In doing so it would make the person do whatever actions they pleased in order to make themselves content. These actions sum up the characters of Macbeth and Lady Macbeth. The witches, in Jacobean times, were seen as a "walking plague" or "Satan's minions" ready to lure any weak human mind into their evil clutches. By Michael Cook ?? ?? ?? ?? 1 ...read more.