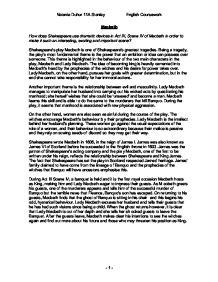 Macbeth (Analysis of The Banquet Scene)

Macbeth How does Shakespeare use dramatic devices in Act III, Scene IV of Macbeth in order to make it such an interesting, exciting and important scene? Shakespeare's play Macbeth is one of Shakespeare's greatest tragedies. Being a tragedy, the play's most fundamental theme is the power that an ambition or idea can possess over someone. This theme is highlighted in the behaviour of the two main characters in the play, Macbeth and Lady Macbeth. The idea of becoming king is heavily cemented into Macbeth's head by the prophecies of the witches and his desire for power takes over. Lady Macbeth, on the other hand, pursues her goals with greater determination, but in the end she cannot take responsibility for her immoral actions. Another important theme is the relationship between evil and masculinity. Lady Macbeth manages to manipulate her husband into carrying out his wicked acts by questioning his manhood; she herself wishes that she could be 'unsexed' and become a man. Macbeth learns this skill and is able to do the same to the murderers that kill Banquo. During the play, it seems that manhood is associated with raw physical aggression. On the other hand, women are also seen as sinful during the course of the play. The witches encourage Macbeth's behaviour by their prophecies. Lady Macbeth is the intellect behind her husband's planning. These women go against the usual expectations of the role of a woman, and their behaviour is so extraordinary because their malice is passive and they rely on sowing seeds of discord so they may get their way. Shakespeare wrote Macbeth in 1606, in the reign of James I. James was also known as James VI of Scotland before he succeeded to the English throne in 1603. James was the patron of Shakespeare's acting company and the play Macbeth, one of the first to be written under his reign, reflects the relationship between Shakespeare and King James. ...read more.

Even though it is Macbeth who called them to the palace to have the banquet, Ross, a Lord still asks Macbeth to,' grace us with your royal company' for dinner. In this scene Macbeth is the King, the supreme monarch and is in charge of the situation. However when he fails to execute the occasion, instead of one of the Lords, who are men to jump to the rescue it is Lady Macbeth who saves the day and appears to be stronger and wiser than her husband is. The most important action during the scene is the appearance of the Ghost. The Ghost provokes so many different reactions of those at the Banquet, especially the Lords and Lady Macbeth because the Ghost is only a figment of Macbeth's imagination. The effect that the appearance of the Ghost of Banquo has on Macbeth at first is that it catches Macbeth unawares. Macbeth has to have his wits about him and recover quickly saying, 'Our country's honour...graced person of our Banquo present.' He does not reveal the secret but rather he says Banquo's presence is missed and so appears to be caring. Macbeth dares the Ghost of Banquo and this gushing makes him seem crazy to his guests. 'Dare me to the desert with thy sword,' Macbeth threatens the Ghost. Macbeth has to rant on and on, to work through his problem. Because Macbeth is rambling on and on, Lady Macbeth fears that he may tell the guests of the murders that she and Macbeth have committed. So Lady Macbeth ends up lying and excusing Macbeth's strange behaviour because the Ghost of Banquo has appeared. 'My lord is often thus, and hath been from his youth.' Lady Macbeth tells the Lords that Macbeth acts like this most of the time. However Macbeth's irrational mumbling develops, and she tells the Lords to 'go at once.' The effect that the Ghost has on Lady Macbeth is that she is not able to be an effective hostess. ...read more.

Firstly by concealing his crime saying,' Here had we now our country's honour roof'd, were the grac'd person of our Banquo present.' Macbeth has his wits about him to remember to keep his murder a secret. Then Macbeth protests his innocence, 'thou canst not say I did it.' He is not only saying he is innocent to those around him but to the audience. The second time the Ghost appears Macbeth challenges it fearlessly. 'Quit my sight!' Macbeth says demanding that the Ghost get out of his sight. 'What man dare, I dare: approach thou like the rugged Russian bear,' says Macbeth. He tells the Ghost that he is brave and bold enough to take the Ghost on. Macbeth lists many strong animals, 'rhinoceros' and 'tiger'. These animals are very fierce and bold and for Macbeth to want to take them on must have meant that he was tormented severely by the presence of the Ghost and wants to get rid of it. We get a deeper insight of Macbeth's complex state of mind because of the Ghost's appearance and the way in which Macbeth talks to the Ghost. I believe this is how Shakespeare makes the scene so important, by displaying the different states of mind Macbeth has. So in conclusion, I believe that Act III Scene IV is the turning point in the play because as a result the scene, Macbeth sees the witches and becomes hungry for more power as well as ruthless and complacent. He is informed that 'for none of woman born shall harm Macbeth.' The scene is an important tipping point, as Macbeth heads in a wrong direction morally, he realises too late that he is 'in blood stepped in so far, that I should wade no more/ returning were as tedious as go o'er'. The most memorable thing about this scene is the Ghost of Banquo; Macbeth is forced to face up the consequences of his actions, and in doing so almost gets caught. ?? ?? ?? ?? Natania Duhur 11A Stanley English Coursework - 1 - ...read more.