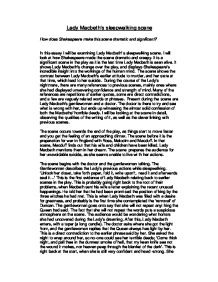 Macbeth - Analysis of the Sleepwalking Scene

Lady Macbeth's sleepwalking scene How does Shakespeare make this scene dramatic and significant? In this essay I will be examining Lady Macbeth's sleepwalking scene. I will look at how Shakespeare made the scene dramatic and creepy. It is a significant scene in the play as it is the last time Lady Macbeth is seen alive. It shows Lady Macbeth's change over the play, and displays Shakespeare's incredible insight into the workings of the human mind. The scene shows the contrast between Lady Macbeth's earlier attitude to murder, and her state at that time, which lead to her suicide. During the course of the Lady's nightmare, there are many references to previous scenes, mainly ones where she had displayed unwavering confidence and strength of mind. Many of the references are repetitions of earlier quotes, some are direct contradictions, and a few are vaguely related words or phrases. Present during the scene are Lady Macbeth's gentlewoman and a doctor. The doctor is there to try and see what is wrong with her, but ends up witnessing the almost solid confession of both the Macbeths' horrible deeds. I will be looking at the scene in detail, observing the qualities of the writing of it, as well as the clever linking with previous scenes. The scene occurs towards the end of the play, as things start to move faster and you get the feeling of an approaching climax. ...read more.

She then says 'One, two. Why then 'tis time to do't.' Here she is referring to the two strikes of the bell, which signalled Macbeth's time to kill the King. The second line confirms this. The next short line is switching topics again, showing that Lady Macbeth is madly rambling about different recent events. 'h**l is murky'. This refers back to her plea to the night again, specifically the line 'pall thee in the dunnest smoke of h**l'. Dunnest is another word for murkiest, so her comment about h**l being murky would line up with her earlier request. She is then talking to Macbeth in her dream. 'Fie, my lord, fie, a soldier, and afeard?' I believe this to be referring to the scene with Banquo's ghost. Macbeth witnessed the ghost, and says to the Queen 'If I stand here, I saw him.' The Queen then replies 'Fie, for shame.' The line calls Macbeth a Lord and a soldier, then questions that he is scared. Fie is used to show express disapproval of someone or something. The line reads that Lady Macbeth is annoyed, maybe ashamed of Macbeth for being scared, because he is a soldier and a Lord. This is why I think it is relating to the Banquo's ghost scene, because Macbeth was certainly afraid in that scene. The next line, I feel is referring back to the same time during the play. ...read more.

This is connected to just after Duncan's murder, when the Lady is pulling Macbeth together and showing her strength. She then goes into another scene where she had to be strong; 'I tell you again, Banquo's buried; he cannot come out on's grave.' The banquet scene was the scene where the Lady showed most her confidence and calm nature. She had to settle down Macbeth, and convince him Banquo was dead, and that it is impossible for him to come alive again. Her final paragraph is; 'To bed, to bed; there's knocking at the gate. Come, come, come, come, give me your hand; what's done cannot be undone. To bed, to bed, to bed.' After the murder of Duncan, there was a knocking at the castle gate, and the pair rushed off to bed, with the Lady still comforting Macbeth. Although at the time, she was confident and clear headed, the repetition shows that now, she is not so sure of herself. She then heads directly to bed. Shakespeare's understanding of the mind is shown, during this scene, as way ahead of his time. During the scene, Lady Macbeth often repeats scenes where she was strong and confident, and had to help Macbeth to get through the difficult times. This emphasises the amount of change between then and now, and tells us that she was very upset and didn't adjust well to the switching of rolls. This may be playing on the fact that now she needs help, Macbeth is not there, and is busy dealing with what became of the deeds she encouraged him to commit. ...read more.