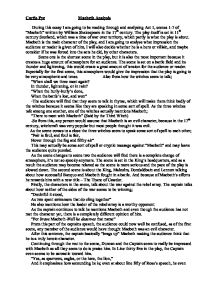 Curtis Pye Macbeth Analysis During this essay I am going to be reading through and analysing Act 1, scenes 1-7 of "Macbeth" written by William Shakespeare in the 17th century. The play itself is set in 11th century Scotland, which was a time of war over territory, which partly is what the play is about. Macbeth is the main character of the play, and I am going to analyse what impression the audience or reader is given of him, I will also decide whether he is a hero or villain, and maybe consider if he was forced into the acts he did, by other characters. Scene one is the shortest scene in the play, but it is also the most important because it creates a huge amount of atmosphere for an audience. The scene is set on a battle field and its thunder and lightening, this would create a great amount of tension for the audience or reader. Especially for the first scene, this atmosphere would give the impression that the play is going to be very atmospheric and tense. Also from how the witches seem to talk; "When shall we three meet again? In thunder, lightening, or in rain? "When the hurly-burly's done, When the battle's lost, and won" -The audience will find that they seem to talk in rhyme, which will make them think badly of the witches because it seems like they are speaking in some sort of spell. As the three witches talk among one another, one of the witches actually mentions Macbeth; "There to meet with Macbeth" (Said by the Third Witch) -So from this, any person would assume that Macbeth is an evil character, because in the 17th century, witchcraft was very popular but most people thought it was evil. As the scene comes to a close the three witches seem to speak some sort of spell to each other; "Fair is foul, and foul is fair, Hover through the fog and filthy air" This may actually be some sort of spell or cryptic message against "Macbeth" and may leave the audience quite puzzled. ...read more.

Banquo and Macbeth then talk about the title he has been given and the scene then comes to a close. Scene four takes place within "The King's Headquarters and once again, the atmosphere has changed. The scene is about King Duncan receiving Macbeth and Banquo with gratitude and then announces that his son Malcolm will be King after him. At the beginning of the scene, the king is talking about the current Thane of Cawdor, and asking if he has been executed yet. He then goes on to talk about how he can't believe people he trusted and what they are thinking by their face; "There's no art To find the mind's construction in the face, He as a gentleman on whom I built An absolute trust" It's ironic because Macbeth is thinking of murder. Also the audience knows more than the characters, so they may think that Macbeth two-faced. Then as Macbeth, Banquo, Ross and Angus enter the scene. King Duncan praises Macbeth and tells him how grateful he is of him. "O worthiest cousin, The sin of my ingratitude even now Was heavy on me." - showing how grateful he is. Macbeth then answers to what Duncan has said; "The service and the loyalty I owe, In doing it, pays itself. Your highness' part Is to receive our duties, and our duties Are to your throne and state, children and servants..." From how Macbeth has answered the King Duncan, and how he has been thinking of killing him, the audience will find that Macbeth is quite a two faced sort of person and will definitely think that he is an evil character. As Duncan continues to talk he thanks Banquo slightly, but not very much compared to how much he praises Macbeth. Duncan praises Macbeth" so much that he is nearly in tears, "My plenteous joys, Wanton in fullness, seek to hide themselves In drops of sorrow. ...read more.

Firstly the audience will notice the bad side of Macbeth as he says he is happy to kill Duncan, so long that there are no consequences in doing so. "...Could trammel up the consequence and catch With his surcease, success, that but this blow Might be the be-all and the end-all-here," This really shows that he has no heart and he doesn't want to suffer for what he does, it will also give the audience the same impression of him, evil. The audience will then see the "Good" side of Macbeth as he disagrees with himself, and then describes Duncan as a pleasant person. "Besides, this Duncan Hath borne his faculties so meek, hath been So clear in his great office, that his virtues Will plead like angels..." He also describes that if he kills Duncan it will be like killing a new born baby; "And pity, like a naked newborn babe" This would make an audience start to think, maybe after all, he doesn't want to kill Duncan, he's just being persuaded, but then again they will then think bad of him as he says; "Vaulting ambition which o'erleaps itself And falls on the'other. This shows, the only reason that he has for killing Duncan, is his own ambition in becoming king, and this persuade the audience to dislike him even more. As the scene then moves on Lady Macbeth enters into the scene, and because Macbeth doesn't want to go ahead with the murder, she seems to attack his masculinity; "And live a coward in thine own esteem" Lady Macbeth at this point is really trying to manipulate Macbeth, and it would make the audience feel sorry for him as he is being forced into something he doesn't want to do. And she keeps trying to manipulate him, explaining that he was a man when he said he would kill Duncan, but now he is a coward as he saying no. ...read more.