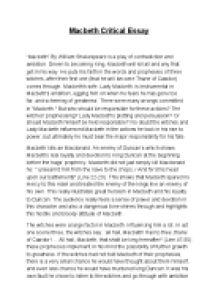 Macbeth By William Shakespeare is a play of contradiction and ambition.

﻿Macbeth Critical Essay ?Macbeth? By William Shakespeare is a play of contradiction and ambition. Driven to becoming King, Macbeth will kill all and any that get in his way. He puts his faith in the words and prophesies of three witches, after their first one (that he will become Thane of Cawdor) comes through. Macbeth's wife, Lady Macbeth, is instrumental in Macbeth's ambition, egging him on when he fears he has gone too far, and scheming of greatness. There were many wrongs committed in "Macbeth." But who should be responsible for these actions? The witches' prophesising? Lady Macbeth's plotting and persuasion? Or should Macbeth himself be held responsible? No doubt the witches and Lady Macbeth influenced Macbeth in the actions he took in his rise to power, but ultimately he must bear the major responsibility for his fate. Macbeth kills an Macdonald. An enemy of Duncan?s which shows Macbeths real loyalty and devotion to King Duncan at the beginning before the hags? prophecy. ...read more.

His loyalty is dissolved into a dark desire to attain the role of King and he changes into an evil ambition driven murderer. However previous signs of loyalty shine through the hunger for success. As you can see the corrupted Macbeth still has essence of honour for the King: ?Is this a dagger which I see before me? The handle toward my hand?. This indicates a contemplation between killing Duncan or not. Which proves that Macbeth still has certain homage towards Duncan even though he has a deep ambition to get the crown. Macbeth kills Banquo and his son. Showing a certain change in what he was like before. All the ?Bravery? and ?Honour? now fading away into a dark haze filled with paranoia and deception. Macbeth fears Banquo; he fears Banquo might suspect him of murder and will not be afraid to act on it. He fears Banquo's goodness now that he himself has lost his goodness: "To be thus is nothing, But to be safely thus. ...read more.

Also regretting all his actions he had prior to this battle. After a while of name calling by Macduff, Macbeth caved in and decided to fight. The significant trait in Macbeth's character was courage. He always had thrown himself into the heat of battles. And this last, lethal battle was no exception. In conclusion Macbeth?s character changed from this Brave, Loyal and Honourable person into a greed and ambition driven killing machine that was paranoid of anyone who posed a threat. Even though the witches and Lady Macbeth certainly play an important part in Macbeth's downfall, the choice is his. He could have ignored the hags' prophecy, like Banquo does. He did not have to share his dark desires with his wife, either. But once he is interested in becoming king, Macbeth is willing to kill anyone in his way. Were it not for this flaw in Macbeth's character, he would have been content with his position of thane and never aspired to be king. In the end, he has no one to blame but himself. By Cameron Brown ...read more.