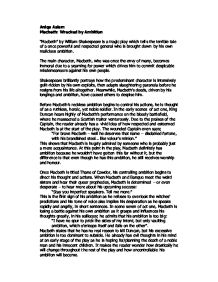 Aniqa Aslam Macbeth: Wrecked by Ambition "Macbeth" by William Shakespeare is a tragic play which tells the terrible tale of a once powerful and respected general who is brought down by his own malicious ambition. The main character, Macbeth, who was once the envy of many, becomes immoral due to a yearning for power which drives him to commit despicable misdemeanours against his own people. Shakespeare brilliantly portrays how the predominant character is intensively guilt-ridden by his own exploits, then adapts slaughtering paranoia before he resigns from his life altogether. Meanwhile, Macbeth's deeds, driven by his longings and ambition, have caused others to despise him. Before Macbeth's reckless ambition begins to control his actions, he is thought of as a ruthless, heroic, yet noble soldier. In the early scenes of act one, King Duncan hears highly of Macbeth's performance on the b****y battlefield, where he massacred a Scottish traitor venturously. Due to the praises of the Captain, the reader already has a vivid idea of how respected and esteemed Macbeth is at the start of the play. The wounded Captain even says; "For brave Macbeth - well he deserves that name - disdained fortune, with his brandished steel... like valour's minion." ...read more.

He wasn't content with the perfectly good life he had before and has now ruined it because he will forevermore be full of penitence. Macbeth's remorse and penitence briskly change to tremendous paranoia and ruthlessness. It is, once again, the ambition which has caused Macbeth to be stripped of his male bravado and revealed to be paranoid and frightful: "Then comes my fit again. I had else been perfect, whole as the marble, founded as the rock, as broad and general as the casing air. But now I am cabined, cribbed, confined, bound in to saucy doubts and fears." Macbeth admits that he is currently tangled up with doubts and fears and everything would be perfectly intact without them. His ambitious desires and aspirations to keep his wrongly claimed throne have caused him to murder those he was once loyal to. "I am in blood stepped in so far that should I wade no more, returning were as tedious as go o'er." Since Macbeth's ambition has caused him to cross major lines, he will never turn back and he will kill anyone who stands in his way. ...read more.

The ambition he always had was easily fuelled by the ambiguous prophecies of the deceiving witches. In conclusion, the adversity "Macbeth" by William Shakespeare renders the downfall of a glorified, respected man who is brought down by his vicious ambition in six stages. At first, Macbeth maintains control and channels his ambition into helping those he is loyal to but after hearing what could be, he yearns for more. Once he takes drastic measures to try and reach his goals, he is plagued by regret and knows he has been forever damned for his actions. Macbeth's ambition leads him to secure his power; he overlooks his guilt and focuses on doing whatever it takes to hold onto his authority. Eventually, the people of his wrongly claimed country learn of his maliciousness and see him as blight in Scotland. Due to the stress his ambition has caused him, Macbeth becomes resigned and fatalistic; he grows tired of life. He understands that he has been tricked by the three witches and simply doesn't want to live anymore because he knows his ambition caused him to break all bonds of loyalty and trust. Shakespeare brilliantly demonstrates, in a variety of techniques, how just ambition alone can bring down the even the greatest of men. ?? ?? ?? ?? ...read more.