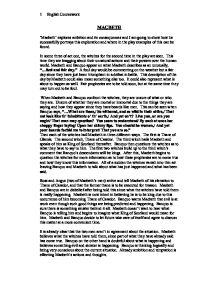 Macbeth' explores ambition and its consequences and I am going to show how he successfully portrays this exploration and where in the play examples of this can be found.

MACBETH 'Macbeth' explores ambition and its consequences and I am going to show how he successfully portrays this exploration and where in the play examples of this can be found. In scene three of act one, the witches for the second time in the play are seen. This time they are bragging about their unnatural actions and their powers over the human world. Macbeth and Banquo appear on what Macbeth describes as an unusually, "...foul and fair day." A foul day would be commenting on the weather but a fair day since they have just been triumphant in a defeat in battle. This description of the day by Macbeth could also mean something else too. It could also represent what is about to happen as well. Fair prophecies are to be told soon, but at the same time they may turn out to be foul. When Macbeth and Banquo confront the witches, they are unsure of what or who they are. Unsure of whether they are mortal or immortal due to the things they are saying and how they appear since they have beards like men. This can be seen when Banquo says, "...What are these,/ So withered, and so wild in their attire,/ That not look like th' inhabitants o' th' earth,/ And yet on't? Live you, or are you aught/ That man may question? You seem to understand/ By each at once her choppy finger laying/ Upon her skinny lips. You should be women,/ And yet your beards forbid me to interpret/ That you are so." Then each of the witches hail Macbeth in three different ways. The first is Thane of Glamis. The second witch, Thane of Cawdor. The third witch hails Macbeth and speaks of him as King of Scotland thereafter. Banquo then questions the witches as to what they have to say to him. The first two witches build up to the third witch's comment that Banquo's descendants will be kings. ...read more.

He wonders whether what he sees is real or a, "A dagger of the mind, a false creation,/ Proceeding from the heat-oppressed brain?" Macbeth decides that the vision of the dagger was simply a manifestation of his unease over killing Duncan. It is obvious that Macbeth is not overly confident nor enthusiastic about the matter of murdering Duncan but his 'lover' has literally forced him into this position through mockery and ambition. As Macbeth hears the signal of the bell rung by Lady Macbeth he heads off to the king's room and commits the murder and says, "I go, and it is done./ The bell invites me./ Hear it not Duncan, for it is knell/ That summons thee to heaven or to h**l." This is Macbeth's concluding speech before going on to commit the murder of Duncan. In act two at the beginning of scene one, Lady Macbeth is waiting for Macbeth to return, is found contemplating to herself about drugging the king's guards and congratulating herself as to how bold she is to carry out such actions. She also asks herself what gave her such courage, evil or sinister spirits perhaps as she asked for earlier on in the play? She says this at the beginning of scene two act one, "That which hath made them drunk hath made me bold;/ What hath quenched them hath given me fire./ Hark! Peace!" She obviously doesn't want anyone else to hear what she is saying since she appears startled when Macbeth enters. Macbeth appears dazed and obsessed with thoughts of damnation after committing the murder. Lady Macbeth notices the blood drenched daggers within the hands of Macbeth's. She tells him to pull himself together after this dreadful mistake and also shouting, "Who's there? What ho!" Lady Macbeth warns Macbeth that he may have woken the guards after that silly act of shouting and tells him to return the daggers to the guards as planned. ...read more.

This sums up Fleance perfectly since he could strike at any time and therefore pose a threat, and also is hard to kill. This is disastrous for Macbeth and Lady Macbeth because it is Fleance that must be killed since he is the main threat towards Macbeth's kingship. If Banquo survived suspicions would arise, but with Banquo dead and Fleance still alive, suspicions are still going to occur and also the threat is still at large for Macbeth and his lady. As the banquet begins and Macbeth sits down with his friends to eat he finds a ghost of Banquo sat in his seat. Invisible to anyone else at the banquet, Macbeth begins to talk to the ghost in the chair although through the eyes of the people attending the banquet it would appear to be Macbeth talking to a chair. If he starts saying too much he may give away information about murders that they have planned and carried out to the other guests. The side effects of the deception, ambition and lies are now beginning to take effect on Macbeth. He is hallucinating images of his victim which means he is worrying about the matter a great deal. All this is a consequence of over ambitious actions carried out by both Lady Macbeth and Macbeth himself. Shakespeare fundamentally shows ambition in two different ways in 'Macbeth'. He shows how ambition can have dreadful consequences and how it can ruin your life. In Macbeth's case he dies which is the ultimate price to pay for his ambition and attempting to change nature's course. Shakespeare also shows ambition as a good thing through Banquo's actions as he stays level headed and lives life each day at a time. Banquo and his role in 'Macbeth' represent the better side of ambition but Macbeth represents the worst side of ambition. Ambition is generally looked upon as a good aspect to a person, but Shakespeare successfully shows how ambition can be both good and bad and what consequences can occur if you have too much of it in 'Macbeth'. ?? ?? ?? ?? 1 English Coursework ...read more.