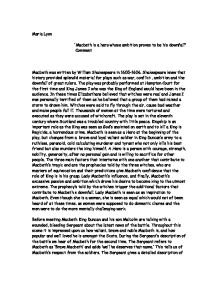 'Macbeth is a hero whose ambition proves to be his downfall&quot;.

Maria Lyon 'Macbeth is a hero whose ambition proves to be his downfall" Comment Macbeth was written by William Shakespeare in 1605-1606. Shakespeare knew that history provided splendid material for plays such as war, conflict , ambition and the downfall of great rulers. The play was probably performed at Hampton Court for the first time and King James I who was the King of England would have been in the audience. In these times Elizabethans believed that witches were real and James I was personally terrified of them as he believed that a group of them had raised a storm to drown him. Witches were said to fly through the air, cause bad weather and make people fall ill. Thousands of women at the time were tortured and executed as they were accused of witchcraft. The play is set in the eleventh century where Scotland was a troubled country with little peace. Kingship is an important role as the King was seen as God's anointed on earth and to kill a King is Regicide, a horrendous crime. Macbeth is seen as a Hero at the beginning of the play, but changes from a brave and loyal valiant soldier in King Duncan's army to a ruthless, paranoid, cold calculating murderer and tyrant who not only kills his best friend but also murders the king himself. A Hero is a person with courage, strength, nobility, generosity, after no personal gain and is willing to sacrifice for other people. ...read more.

First impressions of Lady Macbeth are that she is strong minded woman who loves her husband very much and thinks he could be king but he needs help. Lady Macbeth feels that she must kill Duncan when he comes over for dinner. Lady Macbeth demonstrates her full evil potential when she summons spirits to rid her of her womanly emotions so that she may have the numbness and masculinity to go through with the murder herself 'Fill me from the crown to the toe top-full of direst cruelty...' She doesn't want her conscience to exist and calls the spirits to '...Make thick my blood.' Lady Macbeth takes control and tells Macbeth to ' put this night's great business into my dispatch' It is Lady Macbeth who dominates Macbeth at this stage. Macbeth does not object to her plan of murder either. His better nature fights against his desires and he tells Lady Macbeth that he is the king's kinsman, subject and host. This makes it evident that Lady Macbeth pushes him into doing what he knows is wrong. Lady Macbeth, on the other hand, has lost all compassion at this point and the seed of her masculinity has been deeply planted. Lady Macbeth provides a scheme for Macbeth to assassinate the King. She is manipulative and persuasive in corrupting Macbeth s judgement. 'What beast was't then that you break this enterprise to me? ...read more.

Mentally, the Macbeth from the start of the play no longer exists. When Macbeth hears that the prophecy has become true of Birnam Wood coming to Dunsinane, he rejects this idea and fights on until he realizes that Macduff wasn't born in a natural birth but instead was "Untimely ripped" from his mother's womb. When Macbeth hears of this he realizes what he has done and how he has been tricked by the witches but instead he realizes that it is useless and so he fights on only to be slain. Macbeth, although strong physically, is very weak mentally and it is this weakness which causes the downfall and change of Macbeth. Other factors do however also contribute to this change such as his wife whose ambition is very strong at first and is much more stronger mentally than Macbeth but it is also Macbeth's ambition and his trust in the witches which ultimately change him. Throughout the course of the story it is tough to decide who is a more guilty person, but if you look at it through the eye's of today's law you will see that Macbeth is more guilty of murder. This is because he had killed a lot people before he killed the King. Overall in my opinion the witches hold the biggest proportion of blame as through their prophecies they made Macbeth consider aiming to be king. As in all Shakespearean tragedy Macbeth realizes too late that the witches are masters of equivocation and had tricked him. ...read more.