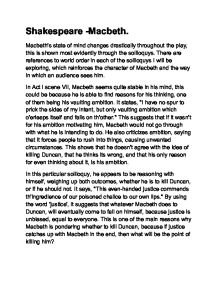 Shakespeare -Macbeth. Macbeth's state of mind changes drastically throughout the play, this is shown most evidently through the soliloquys. There are references to world order in each of the soliloquys I will be exploring, which reinforces the character of Macbeth and the way in which an audience sees him. In Act I scene VII, Macbeth seems quite stable in his mind, this could be because he is able to find reasons for his thinking, one of them being his vaulting ambition. It states, "I have no spur to p***k the sides of my intent, but only vaulting ambition which o'erleaps itself and falls on th'other." This suggests that if it wasn't for his ambition motivating him, Macbeth would not go through with what he is intending to do. He also criticizes ambition, saying that it forces people to rush into things, causing unwanted circumstances. This shows that he doesn't agree with the idea of killing Duncan, that he thinks its wrong, and that his only reason for even thinking about it, is his ambition. ...read more.

Also Macbeth could be thinking that the dagger is a sign, something which is telling him to go on and do the deed, encouraging him, making his decision for him; "Thou marshall'st me the way that I was going". This suggests he is blaming the dagger, but not entirely, because he was going that way anyway. The soliloquy in Act III scene I, is the final turning point for Macbeth. He started off by using his ambition as an excuse for his actions, but by this time he is ready to kill anyone and anything in his way, in order to stay on the throne. In this soliloquy, he talks of how him killing Duncan will ultimately be wasted, If he has no one to hand down the throne to. He therefore sees Banquo and his sons as a threat. For instance, "For Banquo's issue have I filed my mind; for them the gracious Duncan have I murdered." This shows that he feels he has not only disturbed the order of the world and interfered with fate (he did not agree with fate's choice of king), but he has disturbed his inner peace, his sanity, only for Banquo and his sons. ...read more.

There is a semantic field throughout, of life representing life, and the darkness representing death; "All our yesterdays have lighted fools the way to a dusky death. Out, out, brief candle, life's but a walking shadow." By refering to a 'brief candle' Macbeth shows how delicate life is, how it can be extinguished so carelessly. Also the light of a candle flickers, which could refer to life, sometimes being good, sometimes bad. This implication suggests that Macbeth feels that life is monotonous, repetetive, yet insignificant, perhaps he believes humans only exist to carry on the evolution, and this metaphor reiterates that. Overall Macbeth is very selfish throughout the play, and only cares what is to become of him, even when his wife dies, he thinks only of how he must thwart his enemies. The last soliloquy I have looked at, represents what the meaning of life is to Macbeth and shows most effectively what kind He is fully disturbed in his mind by that point, yet what he speaks of has never seemed more relevant. At the start it was his ambition that drove him, where as towards the end it was more of his desire to survive. ?? ?? ?? ?? ...read more.