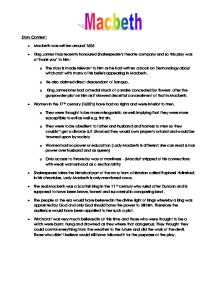 Story Context: * Macbeth was written around 1606 * King James I has recently honoured Shakespeare's theatre company and so this play was a 'thank you' to him; o The story is made relevant to him as he had written a book on Demonology about witchcraft with many of his beliefs appearing in Macbeth. o He also claimed direct descendant of Banquo. o King James later had a medal struck of a snake concealed by flowers after the gunpowder plot on him as it showed deceitful concealment of that in Macbeth. * Women in the 17th century (1600's) have had no rights and were inferior to men. o They were thought to be more misogynistic as well, implying that they were more susceptible to evil as well e.g. first sin. o They were to be obedient to father and husband and hostess to men so they couldn't get a divorce & if divorced they would own property or land and would be frowned upon by society o Women had no power or education (Lady Macbeth is different; she can read & has power over husband and as queen) o Only access to throne by way of manliness - (Macduff stripped of his connections with weak womanhood as c-section birth) ...read more.

hostess, we are your guests tonight" while she plans the "Fatal end to Duncan under my battlements" - she plays the stereotypical women, the perfect mask to get away with murder. * She is very much involved with the murder as she drugs, leaves out the daggers & smears blood over the guards. She even says, "Had he not resembled my father as he slept, I had done it " which is a sign that she is human * She steadies her husband's nerves (a little water clears us of this deed) issuing imperative language and commands over what he should do, but slips later into madness as she sleep walks later through the castle trying to get rid of an invisible blood stain - ambition affects her more strongly than Macbeth before so guilt haunts her more strongly afterward * She is partly responsible for the corruption of Scotland but from the point Macbeth murders the guards unplanned, she slowly slips out of the story * She is cool self-possession who is courageous enough to faint on the news of Duncan's murder for her husband and dismiss him from the banquet. "False faith doth hide what do the heart does know" * Lady Macbeth gets queen which is what she wanted but isn't any happier as her husband drifts away from her (asks permission of ...read more.

* The witches appear in thunder and lightning as they control it. They speak in rhythmical paradox (rhyming couplets) "fair is foul etc." which is echoed by Lady Macbeth and there appears to be an omen over the castle. * The witches plant the thought, Macbeth thinks it and Lady Macbeth waters it * The witches words are comical but a clearly the most dangerous characters as they act as independent agents toying with human lives and their prophecies are reports of the inevitable. * Their effects of temptation are shown in Macbeth as this great military hero is wrapped in a trance, sees visions, is unable to pray and suffers from fear before saying 'I have almost forgot the taste of fears' * They could be thought to have controlled Lady Macbeth in her insanity when she rubs at the "damned spot" as they could have been the ones who as she says "unsexed" her * Shakespeare leaves the witches well outside the limits of human comprehension and only implies stereotypes of the era for the characters * The witches help no one but themselves, even when Macbeth is helped by their prophecies; there are tricks within e.g. Birnam Wood coming to Dunsinane or being killed of a man not born of a woman. (Equivocation is the distortion of truth) ...read more.