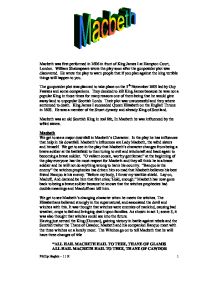 Macbeth was first performed in 1606 in front of King James I at Hampton Court, London. William Shakespeare wrote the play soon after the gunpowder plot was discovered.

Macbeth was first performed in 1606 in front of King James I at Hampton Court, London. William Shakespeare wrote the play soon after the gunpowder plot was discovered. He wrote the play to warn people that if you plan against the king terrible things will happen to you. The gunpowder plot was planned to take place on the 5th November 1605 led by Guy Fawkes and some companions. They decided to kill King James because he was not a popular King in those times for many reasons one of them being that he would give away land to unpopular Scottish Lords. Their plot was unsuccessful and they where sentenced to death. King James I succeeded Queen Elizabeth on the English Throne in 1603. He was a member of the Stuart dynasty and already King of Scotland. Macbeth was an old Scottish King in real life, In Macbeth he was influenced by the w?ird sisters. Macbeth We get to see a major downfall in Macbeth's Character. In the play he has influences that help in his downfall. Macbeth's influences are Lady Macbeth, the w?rd sisters and himself. We get to see in the play that Macbeth's character changes from being a brave soldier at the battlefield to then turing to evil and witchcraft and back again to becoming a brave soldier. "O valiant cousin, worthy gentleman" at the beginning of the play everyone has the most respect for Macbeth and they all think he is a brave soldier and he will not do anything wrong to harm his country. "Banquo is the enemy" the witches prophecies has driven him so mad that Macbeth believes his best friend Banquo is his enemy. "Before my body, I throw my warlike shield. Lay on, Maduff, And damned be him that first cries,'Hold, enough." Macbeth has now gone back to being a brave soldier because he knows that the witches prophecies had double meanings and Macduff can kill him. ...read more.

It is Lady Macbeth who states "Thou wouldst be great/ Art not without ambition." Macbeth states that it is "his besetting sin: I have no spur/ to p***k the sides of my intent, but only/ Vaulting ambition." Macbeth's continued ambition is present in his wanting to have a succession of kings after him. Macbeth's ambition is deep within him and because of this, both the witches and Lady Macbeth is able to sway him to evil. It is this ambition that gets him into so much trouble initially. Once Macbeth kills for the first time, he has no choice but to continue to cover up his wrong doings, or risk losing everything he has worked so hard for. In the end, it all comes to Macbeth himself. Everyone is responsible for his own destiny. This is an essential theme in this tragedy. Macbeth chooses to gamble with his soul and when he does this it is only him who chooses to lose it. He is responsible for anything he does and must take total accountability for his actions. Macbeth is the one who made the final decision to carry out his actions. He made these final decisions and continued with the killings to cover that of King Duncan. However where as some facts show that the results were all of his own doing, in act IV he returns to the witches voluntarily to find out his fate in order to see what actions he should take. This shows that maybe the witches did have a great influence on his actions. The killing of Duncan starts an unstoppable chain of events in the play that ends with the murder of Macbeth and the suicide of Lady Macbeth. Macbeth chooses to murder Duncan. Macbeth, in the beginning had all of the qualities of an honourable gentleman who could become anything. This is all shattered when his ambition overrides his sense of morality. ...read more.

She denies her conscience until she cannot anymore, then apparently goes mad. One question remains - Why did Shakespeare use Lady Macbeth as a cause for the murder of Duncan? To answer this, we need to look at the history of Scotland. The real Macbeth was born around 1005, son of the second daughter of the King, Malcolm II. His wife's name was Gruoch. Her brother and her first husband both died at the hands of Malcolm's followers, who were headed by the son of Malcolm's first daughter, the man who became his successor, King Duncan I of Scotland. Avenging his wife and disputing the throne, Macbeth, Thane of Cromarty and Moray, brought Duncan's rule to an abrupt end: on 14 August 1040, Duncan was mortally wounded in a battle at Pitgaveny after six years as King. Macbeth reigned for a further seventeen years before he was killed in a skirmish at Lumphanan in Aberdeenshire. The vengeance of his wife's brother and first husband were the reason Macbeth killed Duncan, and it may have been his wife who persuaded him to take vengeance. Therefore, we can assume that Shakespeare originally had Lady Macbeth as the real driving force, but added the witches for the benefit of King James I, and the ambition of Macbeth for the audience and for the story. Looking at the evidence I have shown in this essay, I can determine that Lady Macbeth was a major driving force behind the assassination, but Macbeth's ambition and the witches prophecies played an important part in the final outcome. Without the witches' prophetic statements the chain reaction ending in the death of Duncan may never have started. Without Macbeth's ambition, Lady Macbeth may not have been able to persuade Macbeth to commit murder for a crown. Without Lady Macbeth's ruthless determination, Duncan would most probably not have been murdered. I can therefore determine that Lady Macbeth was a Driving force behind the murder of Duncan. Phillip Hogbin - 11 H 1 ...read more.