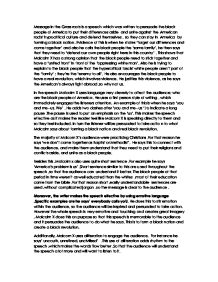 Message in the Grass roots is a speech which was written to persuade the black people of America to put their differences aside and unite against the American racist hypocritical culture and defend themselves , so they can stay in America by forming a black nation. Evidence of this is when he states 'forget our differences and come together' and also he calls the black people the 'same family', he then says that they need to 'defend our own people right here in this country' . This shows that Malcolm X has a strong opinion that the black people need to stick together and have a 'united front' in front of the 'oppressing white man'. Also he is trying to explain to the black people that the hypercritical fascist white people aren't part of the 'family' ; they're the 'enemy to all'. He also encourages the black people to have a real revolution, which involves violence. ...read more.

Moreover, the writer makes the speech effective by using emotive language .Specific examples are he says' everybody calls yoU. He does this to stir emotion within the audience, so the audience will be inspired and persuaded to take action. However the whole speech is very emotive and touching and creates great imagery , Malcolm X does this on purpose so that this speech is memorable to the audience and it persuades the audience to do what he says. This is to form a black nation and create a black revolution. Additionally, Malcom X uses alliteration to engage the audience. For instance he says' uncouth, unrefined, uncivilised' .This use of alliteration adds rhythm to the speech ,which makes the words flow better .So that the audience will understand the speech a lot more and will want to listen to it. As well as this, the writer catches the audience's attention by using rhetorical questions. ...read more.

This is effective as they will agree with him ,also he uses a first person style of writing to get the point across. Also ,Malcolm X engages the reader by not using any facts or statistics. The point of this speech is to persuade people to take action and join the black nation .This kind of an issue doesn't need facts or figures to support it ,it just needs emotion ,so that it tugs at people's heart strings . by not using facts or statistics he achieves the purpose of the speech and it is more effective and emotional .Also when using facts or figures ,political leaders have to be certain that they get them right, in case the media investigate and manipulate followers' to lose trust in them. In conclusion , Malcolm X uses many language devices and rhetorical devices to engage the reader .Such as Alliteration ,Emotive Language, lists, rhetorical questions, repetition ,short sentences ,opinions and a First person style of writing. He uses all these devices to engage the reader and to make the speech effective. ...read more.