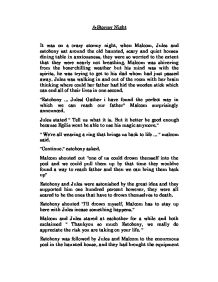 Malcom was shivering from the bone-chilling weather but his mind was with the spirits, he was trying to get to his dad whom had just passed away.

A Stormy Night It was on a crazy stormy night, when Malcom, Jules and estobony sat around the old haunted, scary and quiet houses dining table in anxiousness, they were so worried to the extent that they were nearly not breathing. Malcom was shivering from the bone-chilling weather but his mind was with the spirits, he was trying to get to his dad whom had just passed away. Jules was walking in and out of the room with her brain thinking where could her father had hid the wooden stick which can end all of their lives in one second. "Estobony ... Jules! Gather i have found the perfect way in which we can reach our father" Malcom surprisingly announced. Jules stated " Tell us what it is. But it better be good enough because Egilis wont be able to use his magic anymore." " We're all wearing a ring that brings us back to life ... " malcom said. "Continue." estobony asked. Malcom shouted out "one of us could drown themself into the pool and we could pull them up by that time they wouldve found a way to reach father and then we ...read more.

Mentioned Jules. Jack yelled "Why is his spirit doing this to us? We dont have time to play around! Jules we have to split up and go look for her, you start with the first floor and i'll go to the second. Dont take more than half an hour!" Jules blurt out "NO! JACK! Dont leave me in this house alone looking for Estobony im coming with you, i dont care about how much time this is going to take but im not going alone and we have to find Estobony" He told her " Fine, but your going to have to leave your heels here, were in a rush and we have not time for you to be slowed down by your heels. Hurry up!" They ran out of the pool room and started entering each and every single room in the house to look for Estobony however some rooms were locked so they had to look for keys and it was taking so much time than they couldve imagined. Malcom got really annoyed because he felt like there was nothing else he could do but keep looking for his sister because he needed her. ...read more.

Did you appologize to him on our behalf ?" Malcom said. "Estobony tell us, where he has hidden it if he has told you" Jules asked her. "He says it in the Wickery Bridge, and i dont know where that is and where is it exactly in it or near it or where he has placed it." Claimed Estobony. "Wickery Bridge! What is this man thinking, i dont know why he did this but it possibly is because HE IS OUT OF HIS MIND!" explained Malcom. They all talked for a while then they decided to go sleep. When they woke up the next day they were all in a bad mood, misery and grumpy because they had to fly to "Guacolo" a city in a land where the wickery bridge was located. They burnt the bridge down to peices so that they were a hundred percent sure that there was nothing in the world that could kill them. When they burnt it down, they looked at eachother in happiness because they couldnt believe that they were finally going to go back home and rest after these past 3 dangerous and tiring days. They all went to ride the plain and it turns out that they had ... By: Shahira El Zeinini ...read more.