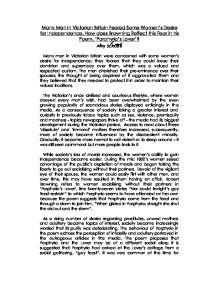 Many Men in Victorian Britain Feared Some Women's Desire for Independence. How does Browning Reflect this Fear in his Poem, 'Porphyria's Lover'?

Many Men in Victorian Britain Feared Some Women's Desire for Independence. How does Browning Reflect this Fear in his Poem, 'Porphyria's Lover'? Amy Sanders Many men in Victorian Britain were concerned with some women's desire for independence; they feared that they could loose their dominion and supremacy over them, which was a valued and respected custom. The men cherished their pre-eminence over their spouses; the thought of being deprived of it aggravated them and they believed that they needed to protect it in order to maintain their valued traditions. The Victorian's once civilized and courteous lifestyle, where women obeyed every man's wish, had been overwhelmed by the ever-growing popularity of scandalous stories displayed enticingly in the media. As a consequence of society taking a greater interest and curiosity in previously taboo topics such as s*x, violence, promiscuity and madness - topics newspapers thrive off - the media had its biggest development during the Victorian period. Access to read about these 'dissolute' and 'immoral' matters therefore increased, subsequently, more of society became influenced by the disobedient minority. Gradually, it became more normal to act violent or to sleep around - it was still seen as immoral but more people took to it While society's loss of morals increased, the women's ability to gain independence became easier. During the mid 1800's women seized advantage of the public's depletion of morals and began taking the liberty to go out socialising without their partners. ...read more.

'Kneeling' is a genuflection; it could be seen as a gesture of religious respect or to show excessive respect when addressing an individual that is more superior to oneself. I think that using this kind of language emphasises the theme of self-importance on the part of the Lover. Furthermore, the Lover declares later on in the poem that "Porphyria worshipped me". 'Worshipping' is generally associated with God, therefore it gives the reader the impression that he is comparing himself to God, he later emphasises this notion by stating that, "God has not yet said a word". This statement also highlights the idea of grandiose self-worth; believing that the horrendous transgression he has perpetrated is not wrong, it is almost like he is suggesting that he is the judge of what is right and wrong. He also augments this by saying, "That all is scorned at once is fled, and I, its love, am gained instead!" implying that he believes that he is superior to God who creates life and life itself. All these are endeavours the Lover implements to make himself more worthy to admire, and be respected; therefore, discretely intending that Porphyria will not gain full independence from him. Powerful, dominant individuals commonly display mannerisms including superficial charm, authority, high influence, deviousness and are capable of being very controlling and manipulative. These together are also the contrasting traits of a psychopath; the reader may question whether there is so much of a difference between a controlling person and a psychopath after reading this. ...read more.

No pain felt she;". By leaving the "and strangled her", to last the suspense is built up and it is more dramatic making the reader want to read on. Men in Victorian Britain feared that they wouldn't be able to successfully save their respected traditions and protect their supremacy over women. Browning highlights this fear; the Lover continuously makes remarks about his power and how much Porphyria 'loves' him in order to reassure himself that he still has power over Porphyria. He declares "Porphyria worshipped me". This statement highlights his denial regarding the fact that Porphyria doesn't belong to him. 'Worshipping is generally associated with God, therefore it gives the reader the sense that he is comparing himself to God, he later emphasises this notion by stating, "God has not yet said a word". Evidently he believes that the horrendous transgression he perpetrated is not wrong by suggesting that even God doesn't disapprove. He also says, "That all it scorned at once is fled, and I, its love, am gained instead!" This signifies his belief of himself being superior to life. These phrases definitely underline his confidence of himself being highly authorative, even above other males. The Lover attempts to increase his self-importance and continues to reassure himself that he is still in control; this is an example of him trying to win back his power, it reflects the men's fear of the women gaining independence. It is displayed in a variety of ways; most importantly through the method in which he reduces Porphyria's self-worth in an effort to boost his own. He therefore hopes that this will diminish Porphyria's chances of gaining autonomy. ...read more.