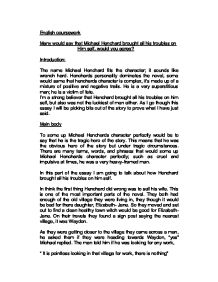 Many would say that Michael Henchard brought all his troubles on Him self, would you agree?

English coursework Many would say that Michael Henchard brought all his troubles on Him self, would you agree? Introduction: The name Michael Henchard fits the character; it sounds like wrench hard. Henchards personality dominates the novel, some would same that henchards character is complex, it's made up of a mixture of positive and negative trails. He is a very superstitious man; he is a victim of fate. I'm a strong believer that Henchard brought all his troubles on him self, but also was not the luckiest of men either. As I go though this essay I will be picking bits out of the story to prove what I have just said. Main body To some up Michael Henchards character perfectly would be to say that he is the tragic hero of the story. This means that he was the obvious hero of the story but under tragic circumstances. There are many terms, words, and phrases that would some up Michael Henchards character perfectly; such as cruel and impulsive at times, he was a very heavy-framed man. In this part of the essay I am going to talk about how Henchard brought all his troubles on him self. In think the first thing Henchard did wrong was to sell his wife. This is one of the most important parts of the novel. They both had enough of the old village they were living in, they though it would be bad for there daughter, Elizabeth- Jane. ...read more.

Before they went Susan threw the ring back at Michael. The next mourning Michael had slept over night in the beer tent, he was thinking about what he had done, and he had just remembered what he had done. This showed a cruel and impulsive side to Michael Henchards character. Another bad side to Michael Henchards character was when he sacked Farfrae. I think this showed a very two faced because he was very frendly towards Farfrae but as soon as Henchard finds out that most of the villagers like Mr Farfrae more than him, he sacks him. Mr Henchard doesn't like the idea of Farfrae and his daughter being together either, in fact he sends Farfrae a letter saying he cant see Elizabeth-Jane again. This shows that Henchard finds it easier to express his feelings in actions rather than words, in most cases this is not the right way to go about your problems, this also shows when he falls out with Jopp. Probably the changing point in the story was when Henchard and Farfrae had a fight over Abel Whittle. Henchard was getting fed up of Abel being late for work, he always used to lye in and not get up for work, well one day Henchard did something about it. He dragged him out of bed and pushed him on to the cart, just at that moment Farfrae turned up, and they both had a huge argument over what they should do. ...read more.

Henchard could also destroy the romance between Farfrae and Elizabeth-Jane by revealing that legally she is no ones child. Henchards moral sense guides him in these instances. He desperately wants to know if he is going to have a good year with a crops or not, so he goes to the weather prophet to see what the weather is going to be like in the next year, he finds out that it is going to rain, and his crops will not grow. This shows that he is a very superstitious man. I think that anyone how reads the book would say that he was a victim of fate. A good example of this is when he and Farfrae held a fair for the whole village, to celebrate the bank holiday. Farfrae had set up his fate indoors and Henchard had set his up out doors, and it rained, this was very unlucky. This was a sinister power working against him. He was also a very brave man; this was proven when he saved Elizabeth-Jane and Lucetta from the bull. Conclusion In conclusion to the question witch has been set, I think that he has brought on his troubles on him self, but also was not the most luckiest of men either. He was remembered for being a man of actions rather than words: capable of overpowering emotions. He gains our sympathy. He makes mistakes but experiences great suffering as a result; he has to learn to accept the workings of fate. He dies alone and defeated. By: Oli Cowling Words:1,445 ...read more.