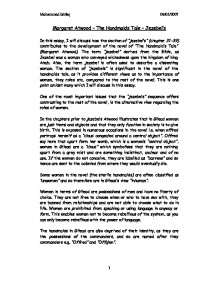 Margaret Atwood - The Handmaids Tale - Jezebel's In this essay, I will discuss how the section of "jezebel's" (chapter 31-39) contributes to the development of the novel of "The Handmaid's Tale" (Margaret Atwood). The term "jezebel" derives from the Bible, as Jezebel was a woman who conveyed wickedness upon the kingdom of king Ahab. Also, the term jezebel is often used to describe a dissenting woman. The section of "jezebels" is significant in the novel of the handmaids tale, as it provides different views as to the importance of women, they roles etc, compared to the rest of the novel. This is one point amidst many which I will discuss in this essay. One of the most important issues that the "jezebels" sequence offers contrasting to the rest of the novel, is the alternative view regarding the roles of women. In the chapters prior to jezebels Atwood illustrates that in Gilead women are just items and objects and that they only function in society is to give birth. This is exposed in numerous occasions in the novel i.e. when offred portrays herself as a "cloud congealed around a central object". Offred say here that apart form her womb, which is a women's "central object", women in Gilead are a "cloud" which symbolises that they are nothing apart from a grey mist and are something indistinct, unclear and of no use. ...read more.

In the novel, when Offred first started seeing The Commander, The Commander simulated an understandable and likeable character towards Offred. He understood the needs of Offred and tried to in somewhat help her and bring her some enjoyment in which she required. However during the chapters in the Jezebel sequence The commander is presented in a more colder and crueller approach. When the Commander comments on the handmaid before Offred he says that she hung herself after Serena found out that she was seeing him forbiddingly. This shows that in some way The Commander is selfish and insensitive in that he has no concern for the handmaids but only thinks about himself and his own pleasures. Once a handmaid has been caught, another would come and it makes no difference to him if Offred gets caught. When Offred sees The Commander just before they go to the club of Jezebels, The Commander treats her in someway equivalent to a child. He firstly greets her by saying "how is the fair little one this evening?" and also by saying "up for a little pleasure". This makes The Commander sound patronising and this differs from previous chapters when he in some ways respected Offred and respected that they are both prisoners of Gilead. He also dresses her up with clothes and makeup for his own pleasure and again treats her to some extent like a child. ...read more.

Here, Atwood approaches Offred in a more positive manner. In chapter 35 Offred says "the arrival of the tray, carried upstairs as if for an invalid. An invalid, one who has been invalidated. No valid passport no exit". What Offred means by saying here is that in Gilead she and other women have been invalidated. Just like an invalid passport, the women of Gilead have no real identity and they are of no use. Again here Atwood presents Offred in a negative manner. Atwood then from showing Offred in a negative way, to positive, then back to negative, she shows us the club of Jezebels and shows us hopes for Offred again. She shows us that there are possibilities for Offred. The reason why Margaret Atwood chooses to continuously show the positive and subdued attitude of Offred, is to show the reader that in Gilead there are ways out and ways of breaking the laws however, there are also ways in which Gilead represses you and its up to the individual in this society to choose whether not to take the risks. The Jezebel sequence on the whole is highly significant to the novel. We many different insights into Gilead in jezebels in contrast to the rest of the novel, which makes it one of the most important sections in the novel of "The Handmaids Tale". ?? ?? ?? ?? Mohammed Ishfaq 09/05/2007 1 ...read more.