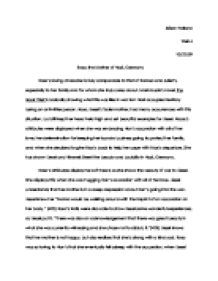 Mark Zusaks novel The Book Thief is basically showing what life was like in war torn Nazi occupied territory being an anti-Hitler person.

Alison Holland Weil 4 10/22/09 Rosa; the Mother of Nazi, Germany Rosa's loving character is truly comparable to that of Romeo and Juliet's, especially to her family and for whom she truly cares about. Mark Zusak's novel The Book Thief is basically showing what life was like in war torn Nazi occupied territory being an anti-Hitler person. Rosa, Liesel's foster mother, had many occurrences with this situation, but still kept her head held high and set beautiful examples for Liesel. Rosas's attributes were displayed when she was embracing Han's accordion with all of her love, her determination for keeping her laundry business going to protect her family, and when she decided to give Max's back to help her cope with Max's departure. She has shown Liesel and Himmel Street the beauty and brutality in Nazi, Germany. Rosa's attributes display her soft heart, as she shows the beauty of war to Liesel. ...read more.

Rosa does this because, "the few scraps of money had still helped in various alleyways. An extra handful of flour. A piece of fat."(260) Rosa is so protective of her family that she tells Liesel to pick up her laundry deliveries because she thought that "those rich people are less likely to fire us if you are the one standing in front of them. If they ask where I am, tell them I'm sick. And look sad when you tell them. You are skinny and pale enough to get their pity."(92) Although Rosa is telling Liesel to lie, she is teaching her a good lesson. She teaches Liesel that she might have to go to drastic measure, to protect the ones she loves. This also shows Rosa's determination as a wife and a motherly figure. Rosa displays her nurturing love when Liesel is coping with Max's departure; this shows everyone Rosa's beauty as she is helping her daughter through a hard time. ...read more.

this displays each others inbounding love and dependency on each other, and Rosa's true headstrong personality. Rosa's interactions with characters in Zusac's novel have shown her beautiful attributes, especially when; she was embracing Han's accordion, the way she kept her laundry business for her families protection, and the way she helped Liesel cope with Max's departure. In this novel she may have sometimes seem cold and harsh, but really, that was not Rosa. Rosa was everything Liesel could ask for in a mother. When Liesel arrived, a huge commotion was reached on Himmel Street, but Rosa protected and defended someone she barely even knew. Also, the fact that Rosa allowed, but welcomed Max into her home was above what anyone could ask for in the Hitler-ruled country. Rosa should be viewed as a wonderful, caring mother, for she truly is. Rosa has shown Liesel and Himmel Street the beauty and brutality of war, in the best ways she possible could. ...read more.