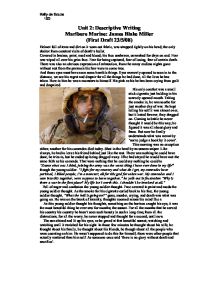 Unit 2: Descriptive Writing Marlboro Marine: James Blake Miller (First Draft 23/5/08) Helmet full of tears and dirt on it worn out fabric, was strapped tightly on his head; the only shelter from constant visits of death's bullet. Covered in bruises, paint, mud and blood; his face unshaven, unwashed for days on end. Fear was wiped all over his grim face. Fear for being captured, fear of losing, fear of certain death. There was also an obvious expression of exhaustion, from the many endless nights gone without rest from the paranoia his fear were to come true. And those eyes must have seen some horrible things. ...read more.

This morning was no exception either, another for his comrades died today. Shot in the head by an unseen sniper. Like always, he had to leave his friend behind just like the rest. There was nothing he could have done, he tries to, but he ended up being dragged away. If he had stayed he would have met the same faith as his comrade. That were nothing that he could say nothing he could to "d**n what was I think, joining the army was the worst thing I have ever done in my life" though the young soldier. "I fight for my country and what do I get, my comrades have perished, I killed people, I'm a monster; all for this god for saken war. ...read more.

For all the months that he served his country his country he hasn't seen such beauty in such a long time; from all the distractions, for all the worry, he never stopped and thought for a second; until now. The sun shined and lit up his eyes, as he gazed at that beautiful sunset; watching and watching until it vanished for his sight. In those few minutes he thought about his wife, he thought about his family, he thought about his friends, he though about all the people who were counting on him. He wasn't supposed to do this for himself; there were other people that actually mattered than him self. As someone once said 'there is no glory without death and sacrifice'. ?? ?? ?? ?? Kelly de Souza 10D ...read more.