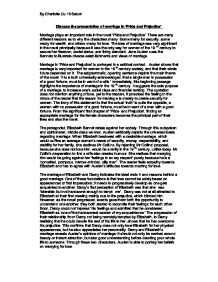 Marriage plays an important role in the novel 'Pride and Prejudice'

Discuss the presentation of marriage in 'Pride and Prejudice' Marriage plays an important role in the novel 'Pride and Prejudice'. There are many different reasons as to why the characters marry. Some marry for security, some marry for wealth, and others marry for love. The idea of marriage was very significant in the novel principally because it was the only way for women of the 19th century to secure her freedom, social status, and living standard. Jane Austen uses the Bennets to illustrate diverse establishments and views of marriage. Marriage in 'Pride and Prejudice' is portrayed in a satirical context. Austen shows that marriage is very important for women in the 19th century society, and that their whole future depended on it. The epigrammatic, opening sentence depicts the main theme of the novel: 'It is a truth universally acknowledged, that a single man in possession of a good fortune, must be in want of a wife.' Immediately, this beginning passage highlights the importance of marriage in the 19th century. It suggests the sole purpose of a marriage; to increase one's social class and financial ranking. The quotation does not mention anything of love, yet to the readers, it provokes the feeling in the minds of the reader that the reason for marriage is merely to create security for women. ...read more.

In the opening chapter, Mrs Bennet is euphoric by the fact that she has just learnt from her friend Mrs Long that Netherfield has been 'let' to 'a young man of large fortune from north of England.' She thinks it is 'a fine thing' for her 'girls'. Mr Bennet has a sarcastic humour and often took pleasure in teasing and mocking his oblivious wife about her preparations to make sure the 'young man' marries one of her daughters. Unlike Mrs Bennet, Mr Bennet would prefer to have his daughters married to a wealthy and 'agreeable man', and he does not care as much about it as Mrs Bennet. He isolates himself in his study to avoid his family, this is the only reason the matrimony is still succeeding; by keeping out of each other's way. Austen shows that it is necessary to have good judgement in choosing a spouse, or the two people will lose respect and the marriage will be unsuccessful. Mr and Mrs Gardiner's marriage is contradictory to Mr and Mrs Bennet's. The reader does not learn much about these two characters, but their marriage is very admirable. They are both well matched; Mr Gardiner is a 'sensible, gentlemanlike man' who is 'greatly superior to his sister' and similarly, Mrs Gardiner is 'an amiable', 'intelligent' and 'elegant woman'. ...read more.

Through the characters in 'Pride and Prejudice', Austen has expressed the issues concerning love and marriage, she is both critical and supportive of the marriages. She criticises Lydia and Wickham because they are an example of a shallow marriage, with the result of misery. In contrast, the relationship of Elizabeth and Darcy is the ideal marriage. It represents true love without the immediate physical attraction or financial reasons which Austen supports and agrees with. The reader realises that happiness in a marriage can only be achieved through this. The use of satirical devices regarding Mrs Bennet, and her 'mean understanding' and 'little information' about marriage demonstrates the outcome of an unpleasant marriage. Mr Bennet has no other options, than to hide from his unfortunate choice of companion, in his study. The union of Mr Collins and Charlotte demonstrates a typical marriage of social contract and convenience; whereas the union between Elizabeth and Darcy shows one of compassion and mutual love. Lydia's marriage to Wickham shows the darker side of society and how an unscrupulous character can easily take advantage of an innocent and foolish child. Therefore, whatever the reason of marriage, personal, social, financial or security, Austen has clearly depicted, with examples of four main courtships in the novel, that without love, the marriage is destined to failure. ?? ?? ?? ?? By Charlotte Liu 10 Saturn ...read more.