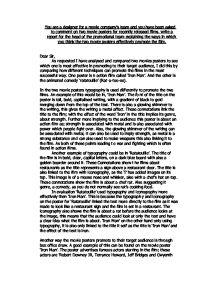 You are a designer for a movie company's team and you have been asked to comment on two movie posters for recently released films. write a report for the head of the promotional team explaining the ways in which you think the two movie posters effectively promote the film. Dear Sir, As requested I have analysed and compared two movies posters to see which one is most effective in promoting to their target audience, I did this by comparing how different techniques can promote the films in the most successful way. One poster is n action film called 'Iron Man'. And the other is the animated comedy 'ratatouille' (Rat-a-too-ee). In the two movie posters typography is used differently to promote the two films. An example of this would be in, 'Iron Man'. The font of the title on the poster is tall, bold, capitalised writing, with a gradient of black to gold merging down from the top of the text. There is also a glowing shimmer to the writing, this gives the writing a metal affect. These connotations link the title to the film; with the effect of the word 'Iron' in the title implies its genre, about strength. Further more implying to the audience this poster is about an action film as; strength is associated with metal and is also associated with power which people fight over. ...read more.

On the other hand 'Ratatouille' does not use box office draw in the same way however, this poster does use a preview of the film from 'empire magazine' to advertise the film. They quoted 'Absolutely sensationally visually breath taking, super smart... funny... complete magic.' This quotation suggests the film is funny and enjoyable to watch. Making people who watch films like this think about watching this film. The movies poster also uses play on words to advertise the film producer company and previous films they made. For example ' from the kitchen that served you finding nemo and the incredibles... Disney pixar'. This informs the audience that the film is enjoyable, as they have made excellent films before so this one shouldn't be different. They also use the play on words to humour the audience looking at the poster, also linking it to the content of the film, as the use of humour is a feature of a comedy. In evaluation 'Iron Man' is more effective in using box office draw, as they write the actors name at the top of the poster and show the actors in character on the poster. This is more effective as the audience can recognise who is in the film and audiences are known to judge the film on who is in the film than who made it, which is what the poster for 'Ratatouille' Does. ...read more.

This is a stereotypical representation of a rat steeling cheese, but with comic expressions, implying the film is going to be funny and appeal to both adults and children. This poster also shows where the film is set, in Paris, as the Eiffel Tower is pictured in the background windows. The French are very strict in the food industry, which shows more comedy to come, as the rat is stealing food in France in a French kitchen. In Evaluation 'Ratatouille' uses the images in the poster most successfully than 'Iron Man' as the audience has more of an idea what they are going to see in 'Ratatouille' but aren't given too much information, so they don't go se the film. The poster for 'Iron Man' only shows the characters and a small picture of an explosion that we don't know is even going to happen in the film. This makes the audience wonder if the film is worth watching, as they do not even know what it is really about. In conclusion 'Ratatouille' poster designers used more effective techniques than 'Iron Man' Poster designers. This helps the film promote to the audience as the poster is the first impression the audience get on the film so if the poster isn't appealing enough the audience will move on to another film. It also means the audience that is interested in both films are more likely to choice 'Ratatouille' as it first impression is more appealing. ...read more.

The analysis here is clear and detailed. The second half of the essay is stronger as observations are linked to the audiences that each film was trying to reach.