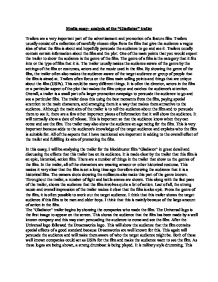 Media essay- analysis of the "Gladiator" trailer Trailers are a very important part of the advertisement and promotion of a feature film. Trailers usually consist of a collection of carefully chosen clips from the film that give the audience a vague idea of what the film is about and hopefully persuade the audience to go and see it. Trailers usually contain certain information about the film and the plot. One of the main points that you would expect the trailer to show the audience is the genre of the film. The genre of a film is the category that it fits into or the type of film that it is. The trailer usually makes the audience aware of the genre by the settings of the film or costumes, actors and the music used in the film. By showing the genre of the film, the trailer often also makes the audience aware of the target audience or group of people that the film is aimed at. Trailers often focus on the films main selling points and things that are unique about the film (USPs). This could be many different things. It is often the director, actors in the film or a particular aspect of the plot that makes the film unique and catches the audience's attention. Overall, a trailer is a small part of a larger promotion campaign to persuade the audience to go and see a particular film. The trailer does this using the best moments from the film, paying special attention to the main characters, and arranging them in a way that makes them attractive to the audience. Although the main aim of the trailer is to tell the audience about the film and to persuade them to see it, there are a few other important pieces of information that it will show the audience. It will normally show a date of release. ...read more.

He is dressed fully in armour making him unrecognisable to the audience. The camera pans, following him as he walks along. The camera tilts to a low angle making the gladiator appear powerful and dominant. The crowd can be seen in the background, a mid-shot, and along with the cheering, this builds up atmosphere and makes the audience feel part of the scene or the crowd. This clip begins to introduce the theme of action to the trailer letting the audience know the next part of the genre. A long, deep drum beat is played as the scene freezes and more text appears on the screen. The next section of the visual voice-over to appear on the screen is "the gladiator". This text clarifies the previous clip for the audience making sure that they understand the plot so far. Next, as the military style drumming continues, we are shown an eye-level close up of the gladiator. The dark colours with red, sandy tones reinforce the genre, as do the costume. The warm colours also make the character appear unthreatening to the audience and make it clear that he is the hero or "goody" in the film. The fact that the camera shot is at eye-level means that the audience feel, in each shot that they are getting to know the character more. The fact that the shot is quite similar to the first camera shot in the trailer means that the audience instantly recognise the character. The determined expression also makes it clear that he is a hero figure in the film. Overall, the clip continues to introduce the main character paying more attention now to his personality rather than his role in the film. The image links the visual voice-over to the character making it perfectly clear who it is talking about. Again, the image freezes and the visual voice-over once again appears on the screen. ...read more.

The final thing to be shown at the end of the trailer is the release time of the film. However it is given a slight twist. The exact words on the screen are "coming soon 2000 AD". While this gives the audience a clear understanding of when the film is to be released, it also adds to the final trace of the historical genre as the letters AD show us that the film is not set in the present day or they would not bother to put the letters there. Overall, I think that this trailer is effective and that it promotes the film using a number of different, useful techniques. The first reason why I think that this trailer is effective is because of the music. The music that is played throughout the trailer is just different variations on a simple military style drum roll. The thing that makes the music so effective is the way that it is synchronised with the different clips in the trailer. The music fits the trailer together in a way that makes it have most impact on the audience. After analysing the trailer, I have also found that the camera shots make the trailer very effective. The way that the different shots are used to communicate the importance, personality and roles of the characters, gives the audience a much better understanding of the characters and the overall plot of the film. Finally, I think that the way in which the trailer uses our stereotypical views and expectations make it very effective. The trailer gives the audience the basic plot but leaves the audience to decide for them self about the characters instead of spoon-feeding the information to them. This means that the audience have much more personal views about the characters and therefore feel more need to see the film. In my opinion, the "Gladiator" trailer is very effective and the use of camera shots, music, originality and plot should make the trailer successful in promoting the film. ?? ?? ?? ?? ...read more.