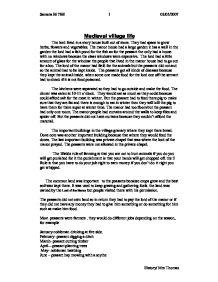 Medieval village life The lord lived in a story house built out of stone. They had space to grow herbs, flowers and vegetables. The manor house had a large garden it has a well in the garden the lord had a fish pond for the fish as for the peasant the only had a house with no windows because the class windows were expensive. The lord had a little amount of glass for the window the people that lived in the manor house had to go out for a loo. The lord of the manor had field for the animals but the peasants did not and so the animal had to be kept inside. ...read more.

The manor had too floors but the peasant had only one room. The manor people had curtains around the walls to keep flies and spider off. But the peasants did not have curtains because they couldn't afford the material. The important buildings in the village granary where they kept there bread. Dove cote was another important building because that where they would feed the doves. The last important building was private chapel that was where the lord of the manor prayed. The peasants were not allowed in the private chapel. The 1fields rule of farming is that you are not to hunt animals if you do you will get punished for it the punishment is that your hands will get chopped off. ...read more.

The peasants did not own land so in return they had to pay the lord of the manor or if they did not have any money they had to give him something or do something for him such as make him food. Most peasants were farmers . they would do different jobs depending on the season, for example January-nobleman drinking at fire side. February- peasant digging a ditch March- peasant cutting timber April-peasant planting trees May- nobleman hawking June - peasant hay mowing with a scythe July-peasant using sickle to cut corn August- -peasant threshing with flail September-peasant picking grapes October-peasant sowing winter corn November-peasant feed pigs on acorn December-peasant slaughtering the pig Another job that they did was making food for the lord. To do these jobs the tools they used they were sickles, scythe, flail, spade and knifes. Samera Bi 7BE 1 03/05/2007 History/ Mrs Thomas ...read more.