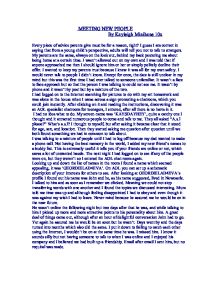 MEETING NEW PEOPLE By Kayleigh Minihane 10x Every piece of advice parents give must be for a reason, right? I guess I am correct in saying that from a young child's perspective, adults will tell you not to talk to strangers. My parents are the same, always on the look out, behind my back pestering me about being home at a certain time. I wasn't allowed out on my own and I was told that if anyone approached me then I should ignore him or her or simply politely decline their offer. I wanted to keep my parents trust because I knew it was all for my own safety. I would never talk to people I didn't know. Except for once, the date is still unclear in my mind but this was the first time I had ever talked to someone unfamiliar. It wasn't a face to face approach but so that the person I was talking to could not see me. It wasn't by phone and it wasn't by post but by a mixture of the two. I had logged on to the Internet searching for pictures to do with my art homework and was alone in the house when I came across a sign-promoting a chatroom, which you could join instantly. After clicking on it and reading the instructions, discovering it was an AOL specialist chatroom for teenagers, I entered, after all there is no harm in it. I had no idea what to do. My screen-name was 'KAYSDAYHEY', quite a catchy one I thought and it attracted numerous people to come and talk to me. ...read more.

We did it to see how one another was. The crucial thing he told me was eight months after we had met. You must be thinking that I said this as if John was my boyfriend but he kind of was in a way. It felt like it anyway, although I never saw him and we hadn't kissed our personalities were made in heaven. "I've got your back and you've got mine. I'll help you out anytime. To see you hurt to see you cry makes me want to weep and die. I'll be right here until the end 'coz you're my love and my bestfriend." This was the moment I realized I was something special to him, when the text message came through and I had read it several times, tears were drawn to the large brown eyes I have, I had a best friend. He told me that from a young age he had never been a slim child. One could say fat but I prefer to call it as obesity. The trouble is other people do refer to the problem people have as well-fed, plump or corpulent and they did with John. John had been bullied. I do not know if you have ever looked it up but it means 'one who oppresses or dominates by threat or superior force or to be teased physically or morally'. How can people pick on others because of what they look like? Human beings are shallow and this is what lead to something awful. John wanted to change his body. He lifted weights and worked out in the gym, but he also began to take drugs and steroids. ...read more.

A letter to him and seemingly he had made a reply parcel. Enclosed is a letter, ten pounds because I lent him money, pictures of himself and a few suprises. John put my picture in a photo frame by his bed together with telling Andy he loved me. I loved him to but as a comrade, at the time when he was alive I believed it was true love but it was lust. I wanted to be with him. I know what loves like now because I'm in love with Adam. I can sense the difference. Being with someone is of a superlative feeling. I still sit up at twilight and contemplate my life, which could have been different because John and I had talked about meeting in 2004 and see where things would lead. I vowed earlier in our social intimacy I would not meet him because of safety and distance reasons but all of my worries had gone. He could have been my lover, my soul mate, my one and only, the light of my life. It's never going to happen now but he was my best mate. He still is. I talk of him as if he's still alive because he is in my heart and always will be. My last recollection will be of John's letter that still has not come through. I don't know what my response will be when I take possession of it but I know the rain cloud will return because there are so many unanswered questions and a sixteen year old who was the finest person perpetually has gone. He recreated me. If I could say one last word to John it would be R.I.P, you have earned it as due compensation. ...read more.