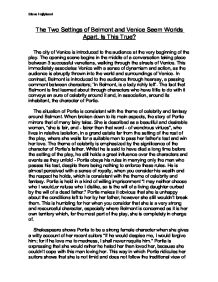 The Two Settings of Belmont and Venice Seem Worlds Apart. Is This True? The city of Venice is introduced to the audience at the very beginning of the play. The opening scene begins in the middle of a conversation taking place between 3 successful venetians, walking through the streets of Venice. This immediately associates Venice with a sense of dynamism and action, as the audience is abruptly thrown into the world and surroundings of Venice. In contrast, Belmont is introduced to the audience through hearsay, a passing comment between characters; 'In Belmont, is a lady richly left'. The fact that Belmont is first learned about through characters who have little to do with it conveys an aura of celebrity around it and, in association, around its inhabitant, the character of Portia. The situation of Portia is consistent with the theme of celebrity and fantasy around Belmont. When broken down to its main aspects, the story of Portia mirrors that of many fairy tales. She is described as a beautiful and desirable woman, "she is fair, and - fairer than that word - of wondrous virtues", who lives in relative isolation, in a grand estate far from the setting of the rest of the play, where she waits for a suitable man to pass her father's test and win her love. ...read more.

The setting of Venice serves as a stark contrast from the world of Belmont. The fact that it is more urbanized compared to Belmont, which I get the feeling is more rural despite this not being covered in the play, signifies the main differences between the two settings. Everything is more money-orientated in Venice than it is in Belmont, as money is abundant in Belmont and therefore not an issue. This is shown when Portia learns of the bond between Antonio and Shylock; "What, no more? Pay him six thousand and deface the bond. Double six thousand and then treble that" This gives a portrayal of Belmont being more mature and sophisticated than Venice, almost as if the affairs of Venice seem less significant and almost petty when held in relation with the inhabitants of Belmont. This is shown in the trial scene, where Portia goes to Venice in disguise and, in effect single-handedly solves the issues and tensions built up by the main characters of the play,. There is a sense of Portia and Nerissa being the adults, lowering themselves in order to sort out the conflicts between the children - being Antonio, Bassanio and Shylock. ...read more.

When Antonio enters the Jewish Ghetto in order to borrow from Shylock, he is going to him reluctantly out of necessity. Shylock immediately comes up with his pound of flesh bond, and then disguises it as a joke in order to lure an unwitting Antonio into it. it is as if he is signing his soul away to the devil. "Mark you this, Bassanio, The Devil can cite scripture for his purpose" This seems more apparent when you consider the fact that Jews were often referred to as devils. At the end of the play, it is the only time Portia and Nerissa appear in Venice, when they go in disguise to Antonio's trial. It seems to me to signify angels descending from heaven (Belmont) in order to perform their judgement and thwart Shylock. This is consistent with the idea of Belmont being more sophisticated and important than Venice. In this way, Venice and Belmont do seem to be worlds apart because, in my opinion they represent the different worlds of heaven and Earth, which is why the audience never actually finds out where Belmont is in relation to Venice. Steve Hajiyianni Steve Hajiyianni ...read more.