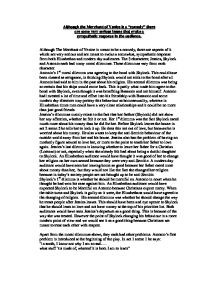 Although the Merchant of Venice is a "comedy" there are some very serious issues that evoke a sympathetic response in the audience. Although The Merchant of Venice is meant to be a comedy, there are aspects of it which are very serious and are meant to evoke a somewhat, sympathetic response from both Elizabethan and modern day audiences. The 3 characters; Jessica, Shylock and Antonio each had many moral dilemmas. These dilemmas vary from each character. Antonio's 1st moral dilemma was agreeing to the bond with Shylock. This could have been classed as arrogance, in thinking Shylock would not stick to the bond after all Antonio had said to him in the past about his religion. His second dilemma was being so certain that his ships would come back. This is partly what made him agree to the bond with Shylock, even though it was benefiting Bassanio and not himself. Antonio had invested a lot of time and effort into his friendship with Bassanio and some modern day directors may portray this behaviour as homosexuality, whereas in Elizabethan times men could have a very close relationships and it could be no more than just good friends. Jessica's dilemmas mainly relate to the fact that her farther (Shylock) did not show her any affection, whether he felt it or not. Her 1st dilemma was the fact Shylock cared much more about his money than he did for her. Before Shylock leaves the house in act 2 scene 5 he tells her to lock it up. ...read more.

It was now Antonio's turn to show mercy upon Shylock. An Elizabethan audience would think this was fantastic because as a society they were very anti-Semitic. Antonio does not wish for Shylock to be killed, however he asks that he give his land to Lorenzo and Jessica when he dies and to convert to Christianity straight away. I think this shows that Antonio has a vicious streak because although, Shylock showed no remorse making somebody like Shylock change their religion is in some cases worse than death. I do feel very sorry for Antonio in one respect because he is very lonely. I think Shylock and Antonio have something in common which is they are both lonely and have money to satisfy themselves. Even though people may argue that Antonio has a lot of friends so he cannot be lonely at the end of the day he has nobody to love and take care of, where as Shylock did have this chance once Jessica leaves him they are both on their own. Jessica is 1st introduced in act 2 scene 3 saying goodbye to Launcelot, who worked for Shylock, but is now leaving. Even before Jessica comes onto stage the Elizabethan audience would sympathise with her because her father is a Jew and she has to put up with the anti-Semitic behaviour as a result of this. To me this also evokes a sympathetic response, but not because I am anti-Semitic, but because through no fault of her own she is hated by the society, that surrounds her. ...read more.

After studying the 3 characters I would say that I think Shylock deserves the most sympathy out of the three of them. I think this because in his day and age he was automatically hated because of his beliefs, so when he showed hatred against anybody it became accentuated because he was a Jew and he showed hatred. I think that Shylock found it very hard to portray his real feelings towards his daughter because he was scared of loving again in case the person he loved got taken away from him again. Even though that is not an excuse he may have thought that if in his heart he knew he loved her it was enough. I know that an Elizabethan audience would completely disagree with me because they were anti Semitic, so to agree with anything a Jew did or said would have been wrong. I thin if they would show sympathy it would have been for Jessica because her father never showed any love towards her and she was hated because of what her father believed. I do not feel sympathy for Antonio because throughout much of the play he feels sorry for himself, but he does not have a reason for this behaviour. The only place in the play where I felt sorry for him was when all his ships crashed and he lost all of his income. I don't think Jessica was the most deserving of sympathy because she found love in the end found her happiness, whereas her father was left with practically nothing all because he believed in something other people didn't! ...read more.