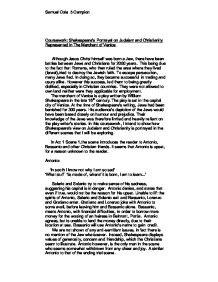 MERCHANT OF VENICE-JEWS AND CHRISTIANS

Samuel Cole 5 Campion Coursework: Shakespeare's Portrayal on Judaism and Christianity Represented in The Merchant of Venice Although Jesus Christ himself was born a Jew, there have been battles between Jews and Christians for 2000 years. This being due to the fact that Romans, who then ruled the area where they lived (Israel),tried to destroy the Jewish faith. To escape persecution, many Jews fled. In doing so, they became successful in trading and usury alike. However this success, led them to being greatly disliked, especially in Christian countries. They were not allowed to own land neither were they applicable for employment. The merchant of Venice is a play written by William Shakespeare in the late 16th century. The play is set in the capital city of Venice. At the time of Shakespeare's writing, Jews had been banished for 300 years. His audience's depiction of the Jews would have been based closely on humour and prejudice. Their knowledge of the Jews was therefore limited and heavily reliant on the play writer's stories. In this coursework, I intend to show how Shakespeare's view on Judaism and Christianity is portrayed in the different scenes that I will be exploring. In Act 1 Scene 1,the scene introduces the reader to Antonio, Bassanio and other Christian friends. It seems that Antonio is upset, for a reason unknown to the reader. Antonio: 'In sooth I know not why I am so sad' 'What stuff 'tis made of, wherof it is born, I am to learn...' ...read more.

We come to understand that Antonio is unable to repay the bond, and Shylock's evil plan can now take full form. Shakespeare does not allow Antonio to beat the bond, to show that Christian's are victims of defeat, and maybe to increase the reader's sympathy for the Christian. Shakespeare ambiguity is very evident here. Solanio even so calls Antonio 'the honest Antonio', and repeatedly calls him 'good' so that Antonio is displayed as 'true'. In contrast Shylocks character is darkened and is shown in a far more vindictive light. However Shylock's speech at first appears to contradict this: 'I am a Jew: hath not a Jew eyes? hath not a Jew hands, organs, dimensions, senses, affections, passion, fed with the same food, hurt with the same weapons, subject to the same diseases, healed by the same means, warmed and cooled by the same winter and summer...' '..If you p***k us do we not bleed, If you tickle us, do we not laugh? If you poison us, do we not die?' Again, we are shown Shakespeare's ambiguous attitude towards the roles of the Jew and Christians, as he contradicts the horrific portrayal the reader has on Shylock, when Shylock gives a powerful speech about the suffering he has faced at the hands of Christian because he is a Jew. We feel sympathy with Shylock because he has suffered plenty discrimination. Shakespeare uses plenty metaphorical innuendo, when we learn the only companionship ever to Shylock was his daughter Jessica. ...read more.

Shylock left shattered, agrees to the deal and asks for permission to leave court. At the end of this decisive scene, it is Antonio whom remains far from the joy of the 'triumphant win over Jew'. In conclusion Shakespeare's views are very ambiguous, because at many points in the play he seems to follow the stereotypical ideas that Christians at that period demonstrated e.g. Antonio's description of Shylock (Act.1 Sc.3 lines:94-98) Shakespeare uses the idea that Jews are evil. However there are times when these views are contradicted(Act1.Sc.3 lines:105-109), for Shakespeare certainly does evoke much pity from the towards Shylock's sufferings, and at some points he seems to shame the Christians mistreatment of Jews, but the constant stream of attack that we observe against the Jews dampen this idea, it could be better said that Shakespeare to some extent, defends the Jews or that he is open-minded, but much evidence in the play suggests that he is biased towards the Christians, who at the end have succeeded against Shylock's evil bond. These are perceived mostly through the characters Antonio and Shylock, Antonio the 'hero' and Shylock the 'villain'. The play ends with good prevailing evil, in all Christianity prevailing Judaism, with Christianity seen as the stronger and superior of the two and this being Shakespeare's perception. We do not know whether Shakespeare was simply following his audience with callous attitudes towards Jews. Shakespeare's heart indeed seemed split, between 'The pained, yet revengeful Jew' and 'The noble, yet chauvinistic Christian'. ...read more.