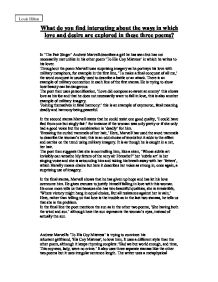 What do you find interesting about the ways in which love and desire are explored in these three poems? In 'The Fair Singer' Andrew Marvell describes a girl he has seen but has not necessarily met unlike in his other poem 'To His Coy Mistress' in which he writes to his lover. Throughout the poem Marvell uses surprising imagery as he portrays his love with military metaphors, for example in the first line, 'To make a final conquest of all me,' the word conquest is usually used to describe a battle or an attack. There is an example of military connection in each line of the first stanza. He is trying to show how beauty can be dangerous. The poet then uses personification, 'Love did compose so sweet an enemy' this shows love as his foe and that he does not necessarily want to fall in love, this is also another example of military imagery. 'Joining themselves in fatal harmony:' this is an example of oxymoron, fatal meaning deadly and harmony being peaceful. In the second stanza Marvell states that he could resist one good quality, 'I could have fled from one but singly fair:' for instance if the woman was only pretty or if she only had a good voice but the combination is 'deadly' for him. ...read more.

The next line, 'Thy beauty shall no more be found', saying that you will be beautiful when alive but when dead no one would be able to see that beauty and that it will have been wasted. On line 26, there is a short pause halfway through the line just after 'My echoing song' which leads on to the second half of the line which uses even greater shocking imagery: 'then worms shall try That long-preserved virginity, And your greater honour turn to dust, And into ashes all my l**t:' Here, the poet writes that after death no one will be able to get to you but the worms as she decomposes and also that her honour in preserving her virginity is going to be worth nothing when she's dead and that, even though, death may be peaceful, 'The grave's a fine and private place, But none, I think do these embrace.' no one will be able to love her when she's dead. Through use of penetrating words and displeasing imagery, he is able to shock his lover. In the final section the word therefore is used to make the act of love seem logical and right. 'Now therefore, while the youthful hue Sits on my skin like morning dew,' this shows that beauty will evaporate and fade away like dew on grass. ...read more.

The speaker then admits that there are other people in the world but still believes that they are unimportant, 'Princes do but play us;' He sees himself and his lover as more important than everyone else, even Princes who need to copy them. He reinforces this point in the next line, 'All honour's mimic; all wealth alchemy.' Here the narrator feels that he and his partner are gold and that everything else is some other worthless metal. 'Shine here to us, and thou art everywhere; This bed thy centre is, these walls thy sphere.' Donne ends the poem with the narrator suggesting that the sun does not need to move because it only needs to warm the world and his bed is the whole Earth. This contradicts both the start of this poem and the end of 'To His Coy Mistress'. Overall I think that the three poems used strange techniques, only one was addressed to the adored female although horrific and negative images were chosen. I feel that in modern times people have a more pessimistic view of love and less and less people would be willing to write a love poem, which would also be written very differently to these three poems. I think that the most interesting thing I found was that the poems were so odd and yet I also enjoyed how different people and their beliefs were in the seventeenth century. ...read more.