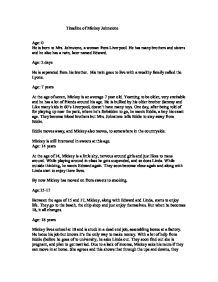 Timeline of Mickey Johnstone Age: 0 He is born to Mrs. Johnstone, a woman from Liverpool. He has many brothers and sisters and he also has a twin, later named Edward. Age: 2 days He is separated from his brother. His twin goes to live with a wealthy family called the Lyons. Age: 7 years At the age of seven, Mickey is an average 7 year old. Yearning to be older, very excitable and he has a lot of friends around his age. He is bullied by his older brother Sammy and Like many kids in 60's Liverpool, doesn't have many toys. One day, after being told of for playing up near the park, where he's forbidden to go, he meets Eddie, a boy his exact age. ...read more.

They soon become close again and along with Linda start to enjoy there lives. By now Mickey has moved on from sweets to smoking. Age:15-17 Between the ages of 15 and 17, Mickey, along with Edward and Linda, starts to enjoy life. They go to the beach, the chip shop and just enjoy themselves. But when he becomes 18, it all changes. Age: 18 years Mickey lives school at 18 and is stuck in a dead end job, assembling boxes at a factory. He hates his job but knows it's the only way to make money. With a lot of help from Eddie (before he goes of to university, he asks Linda out. ...read more.

Sammy offers Mickey a chance to earn �50 for one evenings work. They go to rob a petrol station but the alarm is sounded and Sammy shoots the attendant. They rush home and Sammy hides the gun and then flees. Mickey is arrested and taken to prison. Age: somewhere between 21 and 25 Mickey is released early for good behavior but is now fully addicted to anti depressants. He gets a job and a house, paid for by Edward (although he doesn't know it) who is now a councilor. Mrs. Lyons tells Mickey that Linda and Edward have been meeting each other in private which enrages Mickey. He runs home and tears up the floorboard and retrieves Sammy's gun. He then runs off to where Edward is giving a speech. After learning that they are brothers, he shoots Edward and police marksman open fire, killing him ...read more.