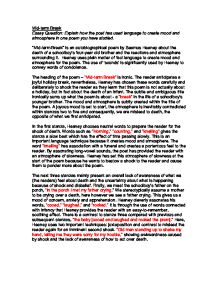 Mid-Term Break - Seamus Heany, Explain how the poet has used language to create mood and atmosphere in one poem you have studied.

Mid-term Break Essay Question: Explain how the poet has used language to create mood and atmosphere in one poem you have studied. "Mid-term Break" is an autobiographical poem by Seamus Heaney about the death of a schoolboy's four-year old brother and the reactions and atmosphere surrounding it. Heaney uses plain matter of fact language to create mood and atmosphere for the poem. The use of 'sounds' is significantly used by Heaney to convey words of condolence. The heading of the poem - "Mid-term Break" is ironic. The reader anticipates a joyful holiday break, nevertheless, Heaney has chosen these words carefully and deliberately to shock the reader as they learn that this poem is not actually about a holiday, but in fact about the death of an infant. The subtle and ambiguous title ironically sums up what the poem is about - a "break" in the life of a schoolboy's younger brother. The mood and atmosphere is subtly created within the title of the poem. A joyous mood is set to start, the atmosphere is inevitably contradicted within stanzas two to five and consequently, we are mislead to death, the opposite of what we first anticipated. ...read more.

This gives us a mood of concern, anxiety and apprehension. Heaney cleverly assonates his words, "cooed," "laughed," and "rocked." It is through the use of words connected with infancy that Heaney provides the reader with an easy-to-remember, soothing effect. There is a contrast to stanza three compared with previous and subsequent stanzas, "the baby [cooed and laughed and rocked the pram]." Here, Heaney uses two important techniques: juxtaposition and contrast to mislead the reader again for an imminent second shock. "Old men standing up to shake my hand, telling me they were sorry for my trouble," showing awkwardness caused by shock and the lack of awareness of how to act over death. Stanzas five and six have significant language use to give an interesting mood and atmosphere. The schoolboy sees his dead brother - yet he sees nothing more than a "corpse, stanched and bandaged by the nurses." Heaney has specifically chosen this word "corpse" to distance the connection between the dead brother and the school boy, causing an atmosphere of melancholy. In stanza six however, the mood changes from depressive to peaceful, "snowdrops and candles soothed the beside." ...read more.

The final, closing stage of the poem consist of a rhyming couplet to emphasise and clarify to the reader that the dead brother was four years old, "A four foot box, a foot for every year," - this line stands by itself finishing neatly and implying finality. Heaney uses pronouns such as "I" and "my" throughout the poem to keep drawing the reader back to his reactions. In the penultimate verse the focus shifts from "I" to "him" - his brother. He uses this shift of pronouns to inform the reader that the subject of the poem is now the schoolboy's four-year old brother. By cleverly using a pronoun shift, Heaney amends the focus of the poem immediately and this causes the reader a sense of curiosity, to think more about the meaning of the poem. Ultimately, "Mid-term break," is a solemn, tragic and elegiac story, written using plain matter-of-fact language to help clarify the reader's understanding of the poem. Heaney has specifically arranged the language of the poem from a casual slow beat to a shocking fast-beat, causing a change of mood and atmosphere for the reader. By Max George Word Count: 936 ...read more.