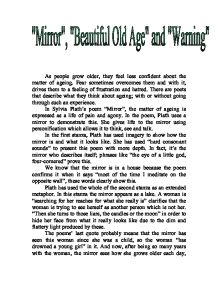 As people grow older, they feel less confident about the matter of ageing. Fear sometimes overcomes them and with it, drives them to a feeling of frustration and hatred. There are poets that describe what they think about ageing; with or without going through such an experience. In Sylvia Plath's poem "Mirror", the matter of ageing is expressed as a life of pain and agony. In the poem, Plath uses a mirror to demonstrate this. She gives life to the mirror using personification which allows it to think, see and talk. In the first stanza, Plath has used imagery to show how the mirror is and what it looks like. She has used "hard consonant sounds" to present this poem with more depth. ...read more.

And now, after being so many years with the woman, the mirror sees how she grows older each day, reason why ageing "rises towards her day after day like a terrible fish". From my point of view, I think Sylvia Plath was a woman that was more frightened of getting old than death. This must have been the reason why she suicided before getting too old. However, D.H. Lawrence sees getting old in a completely different way to Sylvia Plath. His words in the poem "Beautiful Old Age", explains that he thinks ageing "ought to be lovely". Lawrence has used many similes in his poem which shows his point of view about ageing. In the first three verses, Lawrence shows that he thinks ageing is a "wrinkled smile of completeness that follows a life lived undaunted and unsoured with accepted lies". ...read more.

The poem has many more aspects of how she will behave: "I shall spend my pension on brandy and summer gloves and satin sandals, and say we've no money for butter". The poem describes herself as an irresponsible and playful person. Joseph thinks that her life nowadays is boring because she has to "have clothes which keep her dry and pay the rent and not swear in the street and set a good example for the children". Now Joseph can't do these things because she is still young, but when she grows older she will be able to live the way she wants to. She won't have to be nice to people anymore nor show an example to the children. In the last verse she says that "maybe she ought to practise a little now" because then "people who know her are not too shocked and surprised". Shamil Akram Yr.10B ...read more.