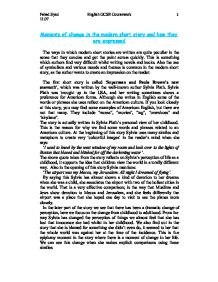 Moments of change in the modern short story and how they are expressed.

Moments of change in the modern short story and how they are expressed The ways in which modern short stories are written are quite peculiar in the sense that they concise and get the point across quickly. This is something which authors find very difficult whilst writing novels and books. Also the use of symbolism and various moods and themes is common in the modern short story, as the author wants to create an impression on the reader. The first short story is called 'Superman and Paula Brown's new snowsuit', which was written by the well-known author Sylvia Plath. Sylvia Plath was brought up in the USA, and her writing sometimes shows a preference for American forms. Although she writes in English some of the words or phrases she uses reflect on the American culture. If you look closely at this story, you may find some examples of American English, but there are not that many. They include "recess", "movies", "tag", "overshoes" and "airplane". The story is actually written in Sylvia Plath's personal view of her childhood. This is the reason for why we find some words and phrases related to an American culture. At the beginning of this story Sylvia uses many similes and metaphors to create very 'colourful images' in the reader's mind when she says: 'I used ...read more.

The mood in 'snowdrops' changes suddenly from when the boy is anxious to see the snowdrops, to hearing the people sing mournfully at the funeral. This is where the other uses words and creates images of a different mood; by doing this he totally changes the atmosphere. The moment of change in the story takes place in this story when the mood turns melancholy and gloomy. This is shown in lines (188-onwards). 'He felt a slow, sad disappointment' the above quote shows the impact made on the boy when he sees that the snowdrops weren't what he had expected them to be. In contrast to 'Superman and Paula Brown's new snowsuit', we also see that in this story the character's perception changes and starts to realise the reality of this world. The way the author has brought this change into this story is very effective because it reflects on the mood. He uses similes such as 'her back was as hard as stone', to describe the boy's teacher, as she is also mourning over her loss. Words such as 'stone' are used to reflect on the gloomy mood and possibly to describe how the characters are feeling. The next short story is called 'Flight', this is written by the author Doris Lessing. ...read more.

through her breast feeding, the narrator does this because the symbolism of breast feeding represents unity within the mother and the child, like an 'umbilical cord'. The mother wants to do this because it is something she did not have with her mother and does not want the same thing happening to her daughter. She does not want her daughter to be in her shoes. In the previous story 'Flight' and this one both writers thicken and enhance their ideas in the story with the use of symbolism. In 'your shoes' and 'flight' both symbols are attached to movements, the pigeons represent the symbol of flight and the trainers represent the idea of purity. Ironically both the symbols of the stories are actually in the title itself, whereas in the other two short stories it isn't the case. In conclusion, after analysing four of the short stories we get the idea that they are written to get the point across quickly and to create more dramatic tension, it is far more easier than writing a novel. We see all thorougout the four short stories that there are changes and transformations in characters perception on things. We also may argue that most of the short stories are written from the authors past experiences or feelings. 1 Fahad Syed English GCSE Coursework 11.07 ...read more.