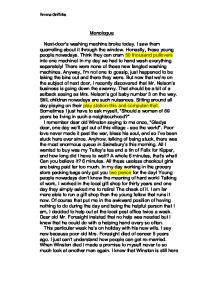 Monologue I remember dear old Winston saying to me once, Gladys dear, one day well get out of this village - see the world. Poor love never made it past the war, bless his soul, and so Ive been stuck here ever since

Monologue Next-door's washing machine broke today. I saw them quarrelling about it through the window. Honestly, these young people nowadays. Think they can cram 50 thousand pullovers into one machine! In my day we had to hand wash everything separately! There were none of these new fangled washing machines. Anyway, I'm not one to gossip, just happened to be taking the bins out and there they were. But now that we're on the subject of next door, I recently discovered that Mr. Nelson's business is going down the swanny. That should be a bit of a setback seeing as Mrs. Nelson's got baby number 3 on the way. Still, children nowadays are such nuisances. Sitting around all day playing on their play station-this and computer-that. Sometimes I just have to ask myself, "Should a woman of 89 years be living in such a neighbourhood?" I remember dear old Winston saying to me once, "Gladys dear, one day we'll get out of this village - see the world". ...read more.

Of course that put me in the awkward position of having nothing to do during the day and being the helpful person that I am, I decided to help out at the local post office twice a week. Dear old Mr. Foresight insisted that no help was needed but I knew that he could do with a helping hand every so often. This particular week he's on holiday with his new wife. I say new because poor old Mrs. Foresight died of cancer 5 years ago. I just can't understand how people can get re-married. When Winston died I made a promise to myself never to so much look at another man again. I know that Winston is still here in spirit and I'm sure that he'd like to know that I've been faithful to him for all this time. It's not like I'm alone anyway. I've got my tabby Kipper and my goldfish Winston the 2nd which provides me with plenty of company. ...read more.

Then I noticed a group of property magazines were being sent to whoever lives at number 24. I'm not surprised they're trying to move when they have so many children in such a small house. I was just opening a letter addressed to Mrs. Jones when I heard the door being opened. Gave me the shock of my life and then luckily I remembered that I had locked the door. So I shouted "just sorting out this last bit of mail and I'll be right there" and crammed all the letters back into their envelopes. I can usually spend all afternoon going through mail without being disturbed but it turned out that Mrs. Foresight needed to use the photocopier that day. Naturally I've perfected the art of opening and then re-sealing letters so that no one suspects a thing. Honestly, how else is a woman like me supposed to know what's going on in this village. I'm hardly doing anything wrong, I'm just the kind of person that likes to keep in touch with current affairs. ?? ?? ?? ?? Emma Griffiths ...read more.