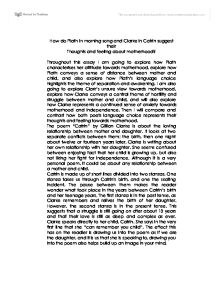 How do Plath in morning song and Clarke in Catrin suggest their Thoughts and feeling about motherhood? Throughout this essay I am going to explore how Plath characterises her attitude towards motherhood, explore how Plath conveys a sense of distance between mother and child, and also explore how Plath's language choice highlights the theme of separation and awakening. I am also going to explore Clark's unsure view towards motherhood, explore how Clarke conveys a central theme of hostility and struggle between mother and child, and will also explore how Clarke represents a continued sense of anxiety towards motherhood and independence. Then I will compare and contrast how both poets language choice represents their thoughts and feeling towards motherhood. The poem "Catrin" by Gillian Clarke is about the loving relationship between mother and daughter. It looks at two separate conflicts between them: the birth, then one night about twelve or fourteen years later. Clarke is writing about her own relationship with her daughter. She seems confused between enjoying fact that her child is growing up, but also not liking her fight for independence. Although it is a very personal poem, it could be about any relationship between a mother and child. Catrin is made up of short lines divided into two stanzas. ...read more.

'The tight red rope of love' is the umbilical cord. The most significant word in this is red, it is used because red is the colour of love or passion. Also red is actual colour the umbilical cord would be because of the blood that flowed between mother and the child in the womb. Mother and child 'fought over' the cord. The verb fought suggests the pain of childbirth. This could show that Clarke thinks violence plays a big part in love. 'I wrote all over the walls with my Words'. This could be the words she screamed when going through labour. She imagines the words 'coloured the clean squares' of the hospital. The coloured squares would give the hospital a new look, making it more interesting and possibly easier for the mother to get distracted and not think about the pain she is going through so much. Also it reflects Clarke's life because there is about to be a big change in everything she does. It is not just her; she has a baby to be responsible for as well. 'The wild tender circles' could possibly refer to the waves of contractions in the lead-up to the birth. ...read more.

The connection between the relation cloud and the shadow and mother and baby reflects again the mind state of Plath very well. She looks upon her newborn child, like a cloud would look at its shadow reflecting herself. The "effacement" is the growing apart of mother and child, that will now begin to take place. She has carried the baby with her, as close as can be, from now on, child and mother will only grow further apart. The "pink roses" is the blanket, the child, breathes on with a "moth breath". The far sea is of course, the constant noise of the baby, the mother has a sixth sense for. The second the mother hears a noise, she will go to the baby, stumbling "cow heavy" (she is still very heavy because of her pregnancy) in her Victorian stile nightgown. The baby tries it's vocabulary, some vowels. Cloud analysis. It doesn't refer to the mother and baby growing further apart, since the second stanza implies that the mother now understand what the baby wants, she comprehends its cries, which are now "clear vowels". Cow heavy, I think this should be amended. Cow heavy would refer to her b*****s and lactation rather than pregnancy weight. I am sorry that this last page is in note form, will write it up. ...read more.