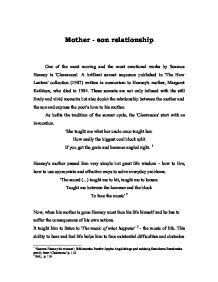 Mother - son relationship One of the most moving and the most emotional works by Seamus Heaney is 'Clearances'. A brilliant sonnet sequence published in 'The Haw Lantern' collection (1987) written in memoriam to Heaney's mother, Margaret Kathleen, who died in 1984. These sonnets are not only infused with the still lively and vivid memoirs but also depict the relationship between the mother and the son and express the poet's love to his mother. As befits the tradition of the sonnet cycle, the 'Clearances' start with an invocation. 'She taught me what her uncle once taught her: How easily the biggest coal block split If you got the grain and hammer angled right. 1 Heaney's mother passed him very simple but great life wisdom - how to live, how to use appropriate and effective ways to solve everyday problems. 'The sound (...) taught me to hit, taught me to loosen Taught me between the hammer and the block To face the music' 2 Now, when his mother is gone Heaney must face his life himself and he has to suffer the consequences of his own actions. It taught him to listen to 'The music of what happens' 3 - the music of life. This ability to hear and feel life helps him to face existential difficulties and obstacles which he encounters on his way. This is one of the most precious and valuable things that the poet inherited from his mother. Neither silver nor Victorian lace but religion is the second and even more important inheritance left by his mother. Religion plays a fundamental role in the relationship between Heaney and his mother. ...read more.

So I governed my tongue In front of her, a genuinely well - adjusted adequate betrayal Of what I knew better. I'd naw and aye And decently relapsed into the wrong Grammar which kept us allied and at bay.'11 The opening lines of this sonnet describe the behaviour of the poet's mother while talking to someone. Mary Kathleen, a simple and very modest woman, fearing she might be perceived as unnatural and insincere posed to be inadequate in pronouncing the words that were 'beyond her'. She did not want to be taken as better educated and haughty and therefore 'she'd manage something hampered and askew'. In that way her pronouncing the name of the famous writer 'Bertold Brek' did not betray those who were uneducated. Being aware of her shortcomings, Mary Kathleen could get rid of her pride and with challenge kept admonishing her well - educated son with a simple and modest remark: 'You know all them things' It is the language that sustains the relationship and tightens the family bonds. In this fourth sonnet from 'Clearances' Heaney recollects his great efforts to adjust to his mother's infrequent and rare sensibility to the formal, adequate and sophisticated language: 'So I governed my tongue/ in front of her (...) I'd naw and aye/ and decently relapsed into the wrong grammar'. Finding 'the proper and adequate words' was the poet's way not to hurt his mother and in that way betray her. The poet governed his tongue and adjusted the pronunciation not to show his 'superiority' over his mother. Heaney was ready to be disloyal towards his convictions and his knowledge only to share the next common ground - namely, the 'wrong grammar' that made their relationship flourish. ...read more.

The white chips jumped and jumped and skited high. I heard the hatchet's differentiated Accurate cut, the crack, the sigh And collapse of what luxuriated Through the shocked tips and wreckage of it all. Deep - planted and long gone, my coeval Chestnut from a jam jar in a hole, Its heft and hush become a bright nowhere, A soul ramifying and forever Silent, beyond silence listened for.14 This sonnet is a symbolic depiction of death. The 'decked chestnut' is an image of life and suffering. The poet's life ends along with his mother's death. Heaney wrestles with his thoughts; the feeling of unimaginable and overwhelming emptiness comes along with the death of his mother. The poet came to a standstill. He is spiritually paralysed. His mother's demise leaves only space that is both utterly empty and utterly a source. The decked chestnut that is cut down symbolizes the speaker's soul. The tree - the poet's coeval, which was grown in a jam jar, collapses and leaves nothing but a 'bright nowhere'. The same is with Heaney's spirit; it is scattered into pieces and the poet himself 'beyond the silence listened for' broods over the past and muses on the great mystery of death. 1 'Seamus Heaney 44 wiersze'; Biblioteczka Poet�w Jezyka Angielskiego pod redakcja Stanislawa Baranczaka tom 8; from 'Clearances' p. 116 2 ibid., p. 116 3 ibid. p. ..................... 4 ibid. p. 120 5 ibid. p. 116 6 ibid., p. 118 7 ibid., p. 118 8 ibid., p. 118 9 'Eseje o poezji Seamusa Heaneya'; pod red. Dawida Malcolma i Oli Kubanskiej; Wydawnictwo Uniwersytetu Gdanskiego; Gdansk 1997 p. 130 10 ibid., p. 131 11 'Seamus Heaney , op. cit. ,p. 120 12 ibid., p. 120 13 ibid., p. 122 14 ibid., p. 122 ?? ?? ?? ?? ...read more.