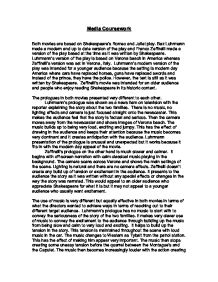 Movies based on Shakespeare's Romeo and Juliet play.

Media Coursework Both movies are based on Shakespeare's Romeo and Juliet play. Baz Luhrmann made a modern and up to date version of the play and Franco Zeffirelli made a version of the play based at the time as it was written by Shakespeare. Luhrmann's version of the play is based on Verona beach in America whereas Zeffirelli's version was set in Verona, Italy. Luhrmann's modern version of the play was intended for a younger audience because the setting is modern day America where cars have replaced horses, guns have replaced swords and instead of the prince, they have the police. However, the text is still as it was written by Shakespeare. Zeffirelli's movie was intended for an older audience and people who enjoy reading Shakespeare in its historic context. The prologues in both movies presented very different to each other. Luhrmann's prologue was shown as a news item on television with the reporter explaining the story about the two families. There is no music, no lighting effects and camera is just focused straight onto the newscaster. This makes the audience feel that the story is factual and serious. ...read more.

The music is not sad as it was in Luhrmanns scene. The audience is not therefore made to feel as emotional. Both versions of the play make good use of music which would appeal to their audience - Luhrmann uses music to heighten tension and make the play dramatic, exciting and sad which would appeal to a younger audience. Zeffirelli, on the other hand, makes use of calm, classical music but uses it only at the beginning and the end of the scene. This would appeal to the older target audience. Both Zeffirelli and Luhrmann make good use of natural light in their versions of the play. Neither use dramatic studio lighting. In Luhrmanns prologue, there is no light so attention is focused on the television. In rest of the scenes all the lighting is natural. This changes when Romeo appears because then the camera points into the sun and makes him look hazy. The audience is left feeling intrigued because they can't really see Romeo. Like Luhrmann, Zeffirelli doesn't use much studio lighting. Most scenes make use of natural light. The use of camera is very different in the two plays and both Luhrmann and Zeffirelli have used well to portray different things. ...read more.

It was based in my time period and everything about the story was updated to the modern day world which made it easier for me to relate to. A good touch to the modern movie was the fact that instead of swords there were guns. To me the old movie was very boring and didn't interest me but I do think that people that were born around the time the movie was made would be able to relate more to the movie and would enjoy it more. Both movies had good points but to me the more modernised version of the story was much better and more exciting to watch. In conclusion I think that both movies have been successful in appealing to their target audience. As I am the same age as the target audience for the modernised version of the play I can say that it has been successful in appealing to me as I enjoyed it and am sure the rest of my class did. I also think the older version has been successful in appealing to its target audience as it has used things in the movie that would appeal to the people born at the same time the movie was made. ...read more.